Why are so many internet marketing gurus shooting themselves live on Twitter?? 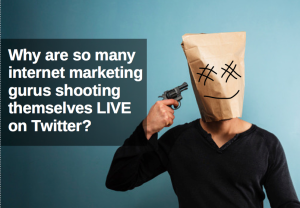 This past week I’ve been messing about on Twitter (@nickupstart)

I don’t mean idly messing about, of course.

“It’s better than me wearing lycra and spending £8,000 on a pushbike, Heloise!” is what I say in my defence.

No, what I’ve been doing has a purpose.

You see, I think there’s room for ‘messing about’ in business in order to test ideas, provoke thought, think aloud, and make personal connections.

I believe that your contacts and prospects and customers want to see you at play, not endlessly churning out ‘business’ messages.

They want to see the person behind the business.

This particularly goes for social media, where most people are on there to find new, interesting exciting links, recommendations, news and ideas… not to be bombarded with boring messages.

You see, I decided to push forward with my @nickupstart twitter account, and follow lots of new people in my niche… marketers, publishers, copywriters, small business owners….

The hope was that I’d keep growing the influx of new ideas and make connections.

But you won’t believe how BORED and DISAPPOINTED I got!

But most of them were posting lame, robotic, clichéd tweets that could have been written by a machine. I’m sure a good deal of these feeds were being run by a scheduling tool. 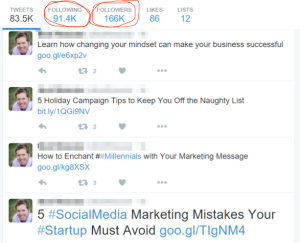 All good information, I guess, but you could look at thousands of other feeds and get the same stuff.

And look at the stats – this guy has 166,000 followers, yet his “Learn how changing your mindset can make your business successful’ got TWO retweets.

To put it in context, I know people with 1,000 followers who regularly get 5-20 retweets and likes when they tweet.

As another example, his “5 holiday Campaign Tips to Keep your Off the Naughty List” has three retweets.

Looking down his feed, he’s not in conversation with anyone because nobody is really replying.

And then think about how he views his own feed of content….

How can he consume and interact with that many feeds?

Quite simply – he can’t.

It must be like rolling NOISE (that is if her ever reads it or pays attention).

These super-pimped marketing gurus pump out constant streams of useful, yet generic and bland tweets that might be instructional, but don’t stand out.

And okay, maybe it works…. just by sheer numbers.

Maybe 166,000 followers is such a huge amount of people, he gets plenty of traffic and conversions from the tiny percent who take notice of a tweet.

But for small business owners and start up entrepreneurs… this sort of approach is NOT going to get you noticed.

You probably don’t have the time or content to create endless rolling feeds of practical advice scheduled in.

What’s more, I don’t believe it really works – and, quite frankly, it’s boring.

Whether you’re a health blogger, restaurant owner or water colourist, there’s plenty to learn from the world of internet marketing advice…

….and that is to DO THE EXACT OPPOSITE of what those marketing experts are doing.

I know this sounds weird. But in my opinion, they are setting a bad example.

I believe that real everyday people on social media people don’t really want to see businesses at all.

If you want to make meaningful connections it’s never been more essential to show humour, warmth, voice and personality in your communications, from your blog posts to emails to social media.

Stand out a bit.

But in that world of street iphoneography (I don’t ever think of myself as a photographer), most people are using Twitter to express themselves, make friends, find influence and inspiration, and have fun.

Those who constantly shill products get blocks.

People who talk only about themselves don’t get their stuff shared.

So why is this not the case in the internet marketing world?

And for that matter, why not in the baking world, the diet world, the accountancy world, the skip hire world, the power tool review world, the coin collecting world?

When you look at it, many businesses and experts are doing it wrong, using social media as a thoughtless publishing platform, spooling out dry functional messages like a malfunctioning receipt till.

But this is an opportunity.

There’s so much potential for you to rise above a lot of boring old stuff published by businesses who are currently much bigger and more successful than you… not by having a bigger list, but by having a stronger connection.

By being yourself. By letting go.

Yes – by messing around a bit.

I don’t know about you, I refuse to be a clone, a marketing drone or a statistic in someone’s 91,000 follower feed.

I am a real human being, not some small business marketing trumpet.

In the past week, I’ve gone back to my Digital Upstart Twitter accountand deliberately done crazy and strange tweets that aren’t “10 tips for an interesting blog” or “how to write an email’ .

I’ve tweeted about video games, Star Wars and music festivals, and how they inspire your business. 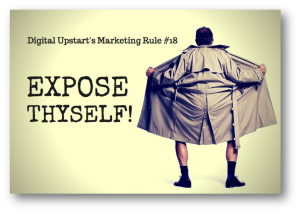 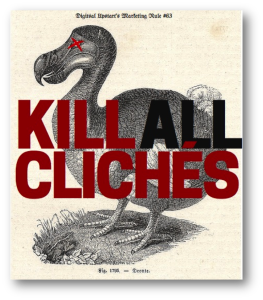 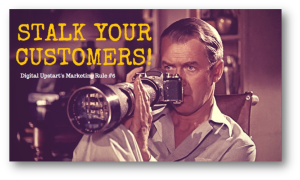 I’ve turned some of them into provocative images, using photos some of my heroes… 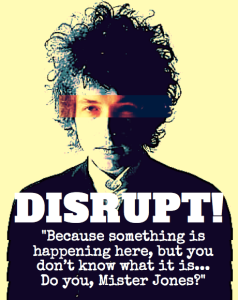 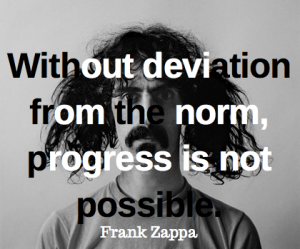 It’s a new start, a new adventure, and I’d love you to come and take a look.

Join in the conversation.

Because I know half the people that follow me won’t because they’re too busy scheduling their “22 signs you’re under-productive” tweets or their picture of a happy goat saying “Smile and the world smiles with you”.

What I want to do is ignore the marketers and platitude-mongers, and start sharing interesting ideas with people I talk to in these emails, on my websites and newsletter.

These are who I’d like to talk to, not some slick haired American guru a suit.

I want to help small businesses, artists, writers, new startups and people who have a product to sell and no idea how to do it.

And if you have any reservations about social media, or questions to ask me, please do.

I will do my best to answer as a human!