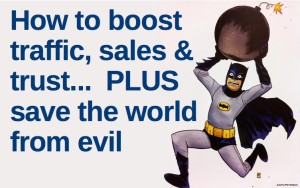 When I was seven I dreamed of saving the world…

As Batman (my favourite), I’d escape from some dastardly trap,  defeat the mad villain and defuse a doomsday device with only seconds to spare…

All the while billions of people watched my exploits on TV screens from the slums of Calcutta to the general assembly of the United Nations.

Back then my actions were more to do with selfishness than philanthropy.

Yes, I’d save the world, but it was really all about the fame, adulation – and the girl!

Of course, if I were to have the same day dream today, I’d hope my motives for taking action would be a little more selfless – rid the world of evil, avoid environmental distaster and generrally save my fellow human beings from living through a nuclear holocaust.

What’s weird is that this ‘save the world’ concept is now a phenomenon in marketing.

And it could work  for you, whatever kind of business you’re in.

Become a cause hero, and make money from it

Jack Cator was a 16 year old kid who grew annoyed with his school for blocking music and games from his computer.

So he used a website route his activities through an overseas server. Now he and his friends could operate in a virtual private network (VPN).

However, being a smart alec, he thought he could do better.

So he created his own version of a VPN called “Hide My Ass”.

Anyway, a decade on, Jack was turning over £11m a year and taking £2 million in profit.

By which point he sold his business to global software group AVG for £40 million.

Despite being a tech braniac, Jack didn’t use any sophisticated hacks to cheat his way onto Google, or gather vast email lists with software robots.

Once he’d created his ‘product’ he went onto internet forums to build up a buzz, sharing ideas and rallying other kids around his cause.

Down with school rules!

Computer freedom for all!

This was something he could do with no budget, and by targeting specifically those forums and social media spaces where his target audience liked to be.

Those people then began eagerly sharing his secret computer network with their connections… and so word of his business began to spread.

Cator says: “I was so surprised that it went viral so quickly. I never wrote a business plan or anything. I just launched the whole site in one afternoon. [But] if people think it’s a good cause, they will share it.”

Once he had an audience, he monetized it.

Every time someone clicked through to a product from his website, he earned money.

Within a month Hide My Ass was earning over £1,000 a month from affiliate links.

Really, this is a classic internet business model…

But here is the real secret that Jack Cator stumbled upon….

“If people think it’s a good cause, they’ll share it.”

Cause-based marketing is where you champion an idea that your target audience can rally behind.

It could be a political idea, a social justice issue, an anti-authoritarian struggle, defence of an underdog, a trumpeting of a certain value or attitude, a rally cry for people with a similar mind-set, or an attack on a common enemy.

The idea is that you link yourself and your business to a cause that inspires and motivates your target audience.

In Cator’s case, he was rallying disaffected and bored teenagers to side-step the school rules and enjoy computer freedom.

They enthusiastically shared the link to his website with their friends, because it was something that could help them all.

A famous case study is American Express, who pioneered this idea in the early 80s.

They advertised the fact that every time someone used an American Express card in San Francisco, they donated 2% to charity.

Use of the American Express card soared.

Ultimately, it was a hugely profitable commercial exercise… and yet most people felt like American Express was doing the community a favour.

In the epoch of social media, these kind of cause-based campaigns are becoming even more powerful.

Many people resist sharing content that’s commercial… but their barriers fall when it’s for a cause they agree with.

There was a great article in Mashable the beginning of the year (you can read it here) which interviewed 8 entrepreneurs about ‘socially minded storytelling’ (basically a cuddlier term for ‘cause-based marketing’).

Here’s what they think are the trends in this kind of marketing.

Ultimately, the idea is put yourself and your business into a story that can be told, passed on, and shared… for the good of wider society, not directly your own bottom line.

Here’s how to go about it.

The first option is to look at your common enemy.

Almost every business or niche interest has one…

Can you rally your target audience around a fight back against a common enemy?

An example might be that you have a dog-training website and you create a “No to Puppy Farms” campaign.

The second option is to look at the common goals shared by your target audience.

For instance… freedom from pain, access for wheelchairs, respect for the elderly, access to information, lower prices, more choice, awareness of conditions…

An example might be that you have a website about insomnia in which you start a “Demand for Employers to Recognise and Respect Insomnia” campaign.

A third option is to look at actual charities and organisations that might be linked in some way to your business, or that a large proportion of your audience might need.

Next you need to start your campaign.

Give something away for free

In order to win trust, you need to genuinely help the cause you’re rallying around. Otherwise there’s little reason for people to share your campaign.

Now you need to tell people about your cause…

The result should be that you genuinely help a cause, but also get free advertising and a lot of new followers on your website, email and social media.

If you’d like to know more about this subject, send me an email and I’ll see if I can get more together on the website and in future issues of Digital Upstart.