What trading tips can we learn from tribal traditions? 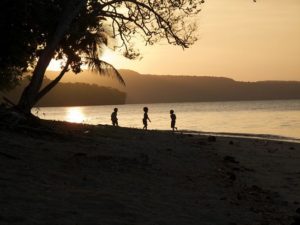 They’re doing an end-of-term performance down at the primary school next Friday.

And Luke – my eldest – is a tribal dancer. So at the weekend we were on the search for tips to help him make it look realistic.

He’d already raided his mum’s wardrobe for a suitably tribal-looking scarf (she doesn’t know yet, so keep that one quiet!) and then we found some old reruns of Bruce Parry’s documentaries about tribal groups on YouTube.

And, well, that was the rest of Sunday morning gone because this stuff is simply fascinating!

At one point, Bruce spent a couple of weeks with a tribe in Ethiopia. We saw a boy coming of age set to go through an initiation ceremony to make him a man.

So of course, before the dancing and celebrations could begin, he had a challenging task to complete…

The rest of the tribe gathered up all their cattle and had them up side by side in a big long line – one person held each tail, and another person each giant set of horns.

The boy then took a run up, jumped onto the back of the first cow (landing on his feet) and ran across the backs of all the other animals down to the end of the line.

He is required to do this four times, twice in each direction, and if successful – determined by not falling off and getting trampled to death or gorged by horns – he then gets to join the men’s hunting party and can marry one of the tribeswomen.

And respect to Bruce Parry: he’d been fully integrated into the family by this point, they daubed him with tribal markings and he actually did the cow jumping too. Rather him than me!

And then have you ever seen something called ‘land diving’?

I’ve seen this one done before.  It is practiced on a small island called Vanuatu out in the South Pacific.

The tribesmen build a huge rickety scaffold tower out of sticks, about 100 feet tall. They then tie two tree vines around their ankles (without measuring first – they have to guess how long to cut them) and then jump off the top of the tower, head first!

It is considered a rite of passage for the young males and a show of warrior-strength for the older ones. If they judge the jump right all is well and they receive a hero’s reception. Get it wrong though and it can be a disaster: concussion, broken neck… or worse.

The men settle any arguments or business disputes before they jump. It prevents any ongoing family feuds in case they don’t come out the other side in one piece.

And the really interesting thing is the people of Vanuatu, as a population, are reportedly the happiest on the planet. And that’s despite living in relative poverty.

Of course, that spectacular tropical climate will always help take the edge off a bad mood.

Their religious beliefs may help them on that score too…

They worship The Duke of Edinburgh as a living god (I swear this is true, look it up after you’ve read this eletter).

Now that may seem a bit strange to us outsiders, but even so, they’re definitely getting something right.

Personally, I think it’s down to the simple and clear rules they all live by as a tribal community. Their society may not be ‘advanced’ according to Western metrics but each member knows exactly what he or she must do to extract the result they want: acceptance into the tribe, their basic needs met, and a life filled with simplicity and joy.

First of all ask yourself a few simple questions that should help get some perspective and clarity on what you want (it’s easy to get lost in the detail of strategies and systems sometimes, and forget the reason you’re doing it all in the first place!).

Now this all might sound a bit weird but I’ve been thinking about it quite a lot since the weekend.

These remote tribes are (or were at one time) totally self-sustaining. If certain members couldn’t be trusted to get up in the morning and do whatever was needed to fill the cooking pots with food for the women, children, and tribal elders, they would become social outcasts.

If they couldn’t bring themselves to do the necessary – to do the things the rest of the tribe expected of them – they’d be shunned and kicked out of the village completely.

When it’s a matter of survival like this –  of life and death – it gives everything clarity. There’s an inbuilt level of accountability that’s totally unavoidable. You do what is needed or you don’t last long. It’s that simple.

But for home traders it can be a bit different. Many have income from elsewhere and their trading campaigns are a secondary source of income.

This does provide an invaluable safety net – it means their families can still eat and the bills still get paid if they have a bad month of trades! – but it also takes away that immediate accountability.

It can be easy for sloppy self discipline to creep in. For excuses to be made for trades missed or panicky decisions made in the heat of the moment. And worst of all, for the merry-go-round of jumping between different strategies and systems looking for the perfect one, instead of settling on something robust and reliable that’ll get results.

So if you ever find yourself in a situation where it feels like you’re treading water and not really making the progress you’d like, do a bit of role playing: think what your tribe would need you to do if their survival depended on your trades.

I’ve even got that outfit you can borrow (size: small) and some nifty Masai warrior dance moves to share if you want to go in for the whole method acting thing!

So a quiet week on the economic reports front. Keep an eye out on Thursday for the UK interest rate decision and reaction to the Bank of England meeting minutes shortly after. Trade safely and I’ll catch you next week.