What this man’s prostate examination means for you 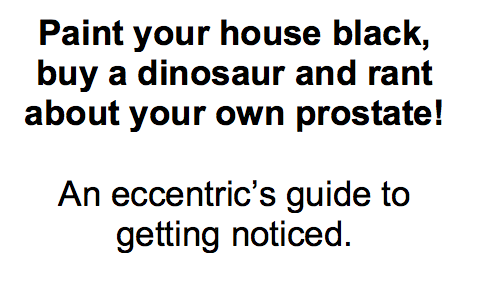 Last week I went to Hastings to visit my friend Gareth.

He’s a copywriter, blogger, author, poet, performer and sometime contributor to Digital Upstart. He knows a thing or two about getting noticed, as you’re about to see.

The idea was that we were going to talk about a new writing project. I had a notebook with me and everything.

Her eyebrows went up at that.

You see, Gareth’s a bit… eccentric.

Quite often he gets me sidetracked, with comic or disastrous results.

And upon reaching his street, he didn’t disappoint.

In a street full of pastel, white and light brown Victorian seaside townhouses…

…his is painted JET BLACK.

It’s like the villain Gru’s house in the Despicable Me. In case you’re not aware of that film, here’s what it looks like:

By 3pm he was insisting on pouring us a gin and tonic. And by 7pm, I was sat in a crowd in a plush independent cinema with a pint of pale ale, watching Gareth wearing a hat, stood in a spotlight, reciting a poem about a love affair with an electricity pylon, to droning and clanking electronic music.

So that’s how the day turned out!

Then again, there’s been weirder.

For instance, the writer Oscar Wilde used to take a lobster on a lead for walks.

But while Gareth is genuinely off-beat, he is also making something of a point – and there’s method to the madness.

His approach to his writing career stems from something he and I developed five years ago – using the fundamental business marketing principles I’ve been sharing with you in Digital Upstart, and which I cannot re-emphasise enough as vital for your success.

A radical approach to selling

Back in 2011, Gareth and I formed The Free Radicals. It was a project in which we helped businesses, publishers and new start-ups create exciting websites, blogs and emails that attracted an audience.

The idea was that we’re prove it by doing it. We’d compete with each other to create challenging, controversial or unusual blog post ideas and headlines, sending out forthright emails declaring our boredom with most ‘content marketing’ and generally making a nuisance of ourselves on Twitter.

It was an experiment to see what happened if we loosened up and just tried to be ourselves instead of what people expected of marketing ‘gurus’.

Within 6 months we had a couple of thousand followers and were invited to present talks at media events. It was a lot of fun and many of the experiments and results went into the foundation of Digital Upstart.

When Gareth went off to pursue a career in his own creative writing, he took those same principles with him.

He treated his new creative project in the same way as he and I had been insisting people should do with businesses.

Within six months of starting out online he’d got a short story published. Within two years a full book was published, then a spoken work album and since then he’s has numerous short story commissions, plus invitations to do talks and presentations around the country.

“All of these were from offers that came to me – I never sent off or applied to do anything.”

When Gareth left London, he had to start a brand new project in a brand new place by the coast. He arrived in knowing nobody, with no contacts in the arts or local history scenes.

The question was, how does a writer get noticed in a seaside town?

To give you an example, over our second gin and tonic he told me about an incident at a local Hastings festival.

He was asked to perform along with a bunch of other poets and speakers on a stage in the park. There were families lolling about on hay bales in the sunshine, looking faintly bemused and bored…

So what did Gareth do?

A 3-minute rant about a prostate examination, with all the grisly details!

Half the audience were wincing and complaining, while the other half were laughing. When he finished the compere came onstage and said: “Are you clapping because you enjoyed it, or because it’s over?”

“At first I was annoyed,” said Gareth. “But then I realised that the people who hated it would never like my stuff anyway, while those who liked it would remember me – it’s not the sort of thing you forget!”

Like me, Gareth believes that to make a mark you need to emphasise your quirks, be bold about your opinions, be passionate, and be prepared to stand in front of strangers, friends and crowds without fear of failure and mockery.

Really, it all boils down to being able to answer these two questions…

• How can you get noticed by the sort of people (your tribe) who will eventually buy your products and services?

• How can you make everything you do online (blog posts, emails and social media feeds) stand out in a crowded, noisy marketplace?

So let’s turn this around and think how you could use this same principle to get attention online. And by that I mean attention from the sort of people who are likely to buy from you – forget everyone else.

Here are some questions to consider…

There is a lot to say on this subject, as really it’s now the fundamental way to attract an audience in this overloaded information age. Anyone can put up a blog or start an Instagram account.

But how can you make it truly stand out?

I’ll be back with more on this very soon.