There’s something mysterious about gaps… those empty voids on our charts.

Sometimes, a gap will cause us to miss our stop level and take a bigger hit on a trade than we were hoping…

But gaps can also be used to our benefit – if we understand them a bit better.

What is a gap?

A gap is an empty space on a price chart between one trading period and the next.

This happens when there’s a big difference in prices between two periods, and the price has moved so fast that no trading has occurred in the price bracket between where one candle finishes and the next one begins.

Gaps generally tell us that something is afoot – such as some economic announcement that has come out with unexpected news, or that some political development has spooked investors.

Or, where markets are closed overnight, there will often be a gap between the evening close price and the following morning, as sentiment shifts in the intervening hours.

Gaps are a great irritation to traders if you have an order placed somewhere within that gap. Either your trade won’t be opened until some distance after the level you requested. Or your trade won’t be closed at the right level – leaving you with a smaller profit or a larger loss that you’d expected.

However, gaps can be used in a traders’ favour if we understand about ‘filling gaps’.

It’s referring to a way of profiting from the markets after the price has suddenly gapped in one direction or another.

And I’ll show you the wrong way – so that you’ll know which ‘gaps’ you can profit from, and which you should steer clear of.

The theory is that when a price has gapped, it will later retrace and fill that gap.

Take a look at the chart earlier in this letter – see how the price went back and ‘filled’ the gap. 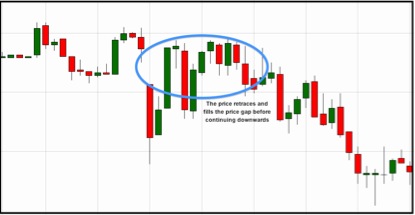 So, if this is the way that prices behave, can we use a strategy to profit from these ‘fills’? Just set up a trade to open where the gap ended, and to take profits where the gap began?

Unfortunately, it’s not that simple.

The truth is that gaps are not always filled immediately (or even at all). Some will be left hanging open for days… weeks… months… or even years.

We want a gap that will fill quickly, before the price heads off in the other direction: this enables us to make a quick profit, without having to resort to wide stop losses and big risks.

So, how can we filter out the gaps we want to trade?

First off, we should work out what sort of gap we’re looking at. There’s a choice of four possible candidates…

These occur at the end of a period of consolidation, or at the beginning of a new trend. These often come hand-in-hand with high volume:

These point to decisive behaviour in traders, and the market will often keep on going – leaving the gap unfilled for some time.

These occur in the middle of a trend, as traders confirm the current sentiment of the value. Again, they’re often accompanied by volume and suggest that traders are behind the trend and not looking for a retracement anytime soon.

These occur near the end of a price pattern and signal a final surge of interest in achieving new highs or lows. This is often a sign that novice traders are jumping on board at the end of a story. 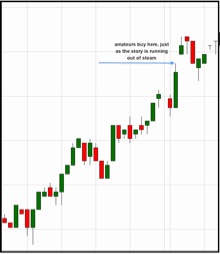 In these examples, there is often a retracement – the problem comes with spotting that a price pattern is ending rather than continuing, so they need to be watched closely for signs of a reversal.

Look for a gap that sits within the normal trading range, rather than as part of a strongly trending market.

These may have been caused by a piece of news or by the payment of a dividend in the case of a stock. These normally fill pretty quickly and should be the gap trader’s bread and butter – these are the gaps to pounce on! 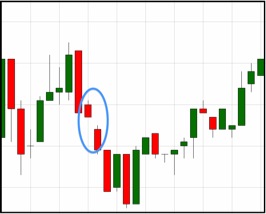 So, if we’re interested in trading gaps that fill, the ones we should be on the lookout for are exhaustion gaps and common gaps.

In the case of a breakout gap or a continuation gap, the price will often be moving quickly on, and won’t be looking to revisit these old levels any time soon.

However, common and exhaustion gaps will often fill within a few candlesticks, and this ‘filling’ happens for two good reasons: first, the sudden jump that the price took up or down was probably caused by misplaced optimism or pessimism, which was likely to be corrected; and secondly, a market gap leaves no areas for support or resistance within it, so if the price retraces, there is no obvious level for it to stop until it has closed that gap.

A safer way to trade gaps

Okay, so let’s say that we’ve found a common gap, and we’re anticipating that gap being filled…

However, I’m not prepared to risk my money on this – there are still plenty of gaps that don’t fill… or that take such a long time to fill that we’re left with money at risk in the market for way too long.

So, rather than risk my money in the hope that the price will retrace and fill that gap, I’m going to take a safer option – waiting until it has filled the gap and resumes it’s original direction. 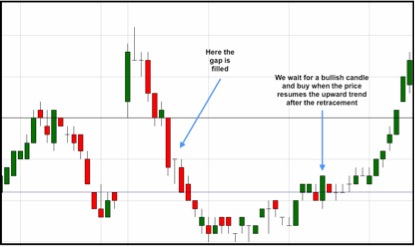 This style of trading gives us the benefit of not having to rush into our gap trade while we’re still unsure of the kind of gap we’re looking at.

Of course, we may miss out on some opportunities, but we should only be trading the surest and safest moves – with tighter stops and faster entries.

If you’re looking to profit from gaps, these are the three rules to remember…

Prices will not always fill gaps: don’t rely on gaps being filled – sometimes fills can be a long time coming, with plenty of movement in the wrong direction.

Wait for the right kind of gap: not all gaps are created equal. Some are confirmation that a strong price move is underway, and these levels are unlikely to be revisited in the near future.

Trade in the direction of the trend: some gaps aren’t fully filled – they might only go halfway, or less. If you wait until the gap is fully filled and the original direction is resumed, you’ll have much more confidence in your trade.

By knowing these rules, if you’re looking for retracements in the markets to trade from, you’ll be better place to hunt out the very best trading opportunities.