This quote made my head tingle

The first time I read that quote by futurologist Kevin Kelly, the hairs on the back of my neck stood up and my skin tingle!

In a world where the news is full of negative stories of war, corruption, greed and the failure of humans to get along with each other… here was a positive message…

Anyone genuinely interested in starting an online business can’t hep but be inspired to drive forward with their plans.

They certainly won’t be sitting on their hands, thinking, “all the money’s been made online, everything’s been done before, there’s nothing I can create that’s new or interesting”.

Because if you think that, you couldn’t be more wrong. I’ll show you why in a moment.

BUT WAIT – DO NOT SCROLL DOWN!

Before I reveal all, I need to take you back in time, twenty years ago, to 1996.

To aid in this act of time-travel, I’m going to switch on the soundtrack to that time, with some of the year’s hits.

I hated all that stuff.

So at lunchtimes I would leave my office on Regent’s Street and go to HMV to shop for CDs.

Back then if you wanted to find music that wasn’t played on mainstream radio, you had to go to a listening post and stick some earphones on, relying on whoever worked there to pick some interesting sounds.

There was no Spotify, Soundcloud or YouTube to listen to the band’s latest, hear samples, or check out their previous work.

If you wanted to know what music critics thought about an artist you’d have to buy the NME, Select, Mojo Magazine or dig through the music supplements in the weekend newspapers.

I remember buying DJ mixes and compilations by the likes of David Holmes and The Idjut Boys.

They were like gold dust because this was the closest you could get to experiencing them at a club, and it was a great way to find new music to explore.

Get a good mix CD before anyone else and suddenly you were Mr Music Taste, with people coming to parties at your house and marvelling “WHAT IS THIS?”

(Only some people, I’ll admit – a lot of friends would just roll their eyeballs and say “More weird music then, Nick”.)

Of course, there was no Mixcloud back then. Now thousands of DJ mixes are uploaded every month by professionals and enthusiastic music lovers, podcasters and international radio station in EVERY niche genre you could think of.

Neither could I pick up an album then give it a quick check on my phone to see if it was worth buying.

Because my phone was a chunk of plastic with some buttons (3 letters allocated to each button!) and some limited storage for numbers.

Oh, and you could play a crappy game where you’re a snake eating dots and trying to avoid your own tail.

Lots of people didn’t have a phone yet, so you could only call those who did, and for the most part if you missed a rendezvous with a friend in London then you’d not get to see them at all.

Want to find a location? Buy a map or ask a policemen.

There was no Google maps.

I’d just joined a publishing company that started using email to communicate more easily between the London office and the parent company in the USA.

Our entire client database was made up of postal addresses.

There were no email newsletters.

Amazon had only just launched and looked like this: 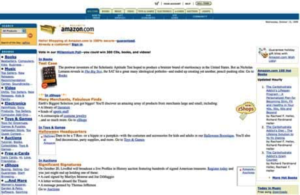 Most telling of all, back in 1996 people called it THE WORLD WIDE WEB, much in the way some elderly people say ‘continental quilt’ instead of ‘duvet’.

A page took almost a minute, sometimes more, to load onto the screen.

Do you remember the way and image used to manifest in segments, slowly, from the top of the screen to the bottom?

You’d sit there silently cheering it on like you were betting on a horse.

Now think of what’s happened since 1996.

Consider the monumental change… The number of innovations, revolutions, technological leaps and changes to society.

No wonder that a lot of people moan to me about being ‘too late’ to make money on the internet. They missed the early days of blogging, of Amazon and eBay selling, of social media… all the businesses have been created… all the niches have been filled… there’s too much competition.

This is what I hear all the time, usually from those wanting an excuse not to do anything, to opt out of even trying.

But here’s the mind-blowing thing…

You might look back over 20 years and think all the innovations have happened. That we’re at the END of a process.

It’s natural to think like this, However, this is completely the wrong way to look at it.

We are actually right at the beginning of the revolution.

Think of everything that happened since 1996 and imagine that same amount of innovation happening AGAIN, but accelerated, like an exponential curve.

Because this is how technology moves… 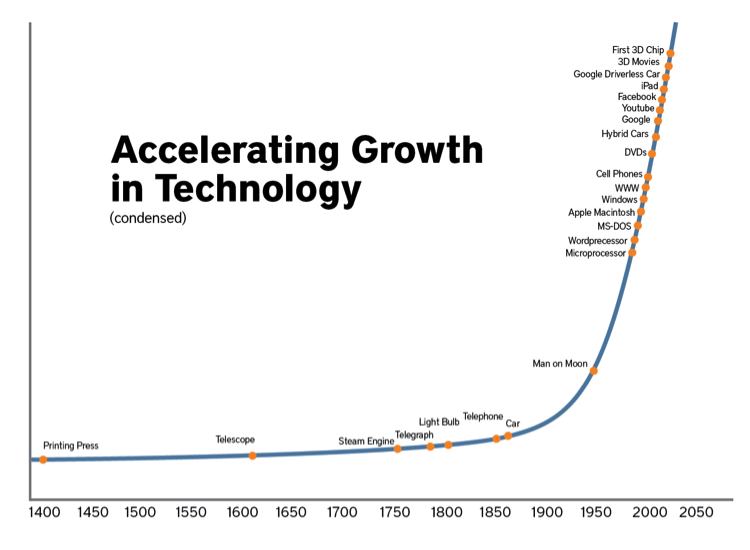 In as little as 10 years you’ll look back on today as a time where so much hadn’t happened yet… where so much was possible… just like the ‘wild west’ days of the late 90s internet seem to us now.

So if you’re going to do this, and make a go of it, really NOW is the time.

The mad truth is that the greatest products of the next 20 years have not been invented yet.

A few weeks ago I mentioned a book called The Inevitable by Kevin Kelly. Here’s that quote we started with in full:

Today truly is a wide-open frontier. We are all becoming. It is the best time ever in human history to begin.

You are not too late.”

If you want to hear more about this and haven’t time to read the book, I’d urge you to watch this: 12 Inevitable Tech Forces That Will Shape Our Future

Quite the opposite – the boat is only just leaving, so it’s time to get on board.

If you’re not forging ahead with your online (or offline) business, there’s no excuse!

I’ll leave you with that thought – and please do check out that video.