The key to football trading… PLUS: a look ahead to the Hennessy Gold Cup

My one and only football stats website – www.soccerstats.com – is down and I’ve got a weekend of football research to do!

Call the National Guard! Fear not, I have found a site called www.fcstats.com which has the ‘challenge table’, which I thought was the sole preserve of Soccer Stats.

Simple isn’t it!? An at-a-glance look into the future! QPR play Leicester at home tomorrow. What does the challenge table tell you?

Well, against 14th and 16th in the league at home, QPR have kept a clean sheet and won. Against 17th, they tried to keep a clean sheet, and conceded one goal. The match with Leicester is likely to be a match based on defensive strengths from QPR don’t you think?

Get to know this challenge table. It is usually found at www.soccerstats.com (we’re not worthy!) but when that website is down, use www.fcstats.com.

Now November is nearly done and there is a good amount of matches to work from, the challenge table is your glimpse into how a team is likely to perform against another team in the top-third, middle-third or bottom-third of the league, home or away.

‘It’s not “tradethehorses” you fool!’

I felt like saying to myself. It’s ‘www.tradingthehorses.com’ – the software I mentioned last week in the eletter. For those of you who have tried to find a way of trading horses using the betting exchanges, rather than the traditional method of punting, this website might offer a solution to you.

The software acts as a predictor of likely price movement in a horse.

I’m still trialing it myself. I must say, off the bat, that my vote as far as sports trading is concerned is very much in the footballing arena above anything else.

Let’s look at that trading definition again – ‘the anticipation of a future price movement’ – and apply it to Liverpool and their managerial dream team of Ted Rodgers and Dusty Bin. Liverpool were away to Ludogorets mid week. You can guess what happened…

Ludogorets scored first. I ‘anticipated a future price movement’ here because I did not think Ludogorets would score two consecutive goals and thought Liverpool would equalise.

So how do we profit from anticipating a future price movement? Well, I backed Liverpool at higher odds 1-0 down, and layed Ludogorets. I anticipated a Liverpool equaliser, which would move the price and allow a successful trade.

Ludogorets were 2.18 odds to lay 1-0 up. Once they conceded the next goal, their odds rose to 4.00 allowing a profitable trade.

Horse racing trading is more ‘weight of money’ based so the ‘future price movement’ comes largely from reading the market, rather than anticipating, as we can do with football.

Give it a go yourself this weekend, or if you want old muggins here to do all of the work for you, check out www.drt.club.

We usually clean up on a Saturday with many trades like the Liverpool one. The Betfair learning zone is a great help for newbies to trading – http://learning.betfair.com/en/.

I’ll be continuing my trial with www.tradingthehorses.com and indeed the simple horse racing strategies in the book Lay Back and Think of Winning, which I mentioned last eletter, but my heart will remain with the Beautiful Game.

Before we move on, these ‘anticipation of future price movements’ are everywhere. Ireland were playing Australia last weekend. Ireland took a 17-0 early lead…

Anyone dismissing Australia at this stage I would say are a little quick on the trigger. Why not back Australia 17-0 down in anticipation that they fight back (which they did – to actually lead at one stage) and their odds drop lower than the price at which you backed? Keep yer eyes peeled! 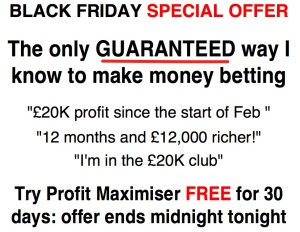 I was reasonably happy with the punts I put forward last week, in the 225 Haydock: avoiding the favourite paid off as he came in fourth, and in the 300 Haydock, the Paul Nicholls Chase – sorry the Betfair Chase – Paul Nicholls’ Silvianico Conti won at 10/3. I put that one forward.

And away from Haydock to the golf, I put forward a lay of Rory McIlroy at 2.32, and that was profitable as Rory was pipped to the title in Dubai.

Do watch out for such short-priced players, trading this low after just one round (a Thursday) in ultra competitive golf championships. We have three more days of golf. With golf being such an exacting sport, one mistake can let the hunting pack in.

I would not, though, lay Rory this week in Sydney as this looks like a jolly for him. The field is missing the high-calibre players who were in Dubai. Rory is 2.78 to lay coming into the Friday round, but in this Australian Open, only Adam Scott and Jordan Spieth seem the only recognizable high-calibre opponents.

It will be interesting to see how Rory’s odds in this Australian Open move over Friday, Saturday and Sunday. This is yet another form of sports trading isn’t it? We are ‘anticipating that future price movement’ by hoping that the leader after the first of four rounds cannot lead all the way to the end of the tournament.

Do look out for this over the season though. If a player is under the odds of 3.00 after a first round of golf, we should see a profit laying these players over a season.

It’s Hennessy Gold Cup weekend at Newbury, so let’s see if the past winners analysis can turn us away from a favourite, or towards a favourite.

120 Newbury – Only two favourites have won this race since 2005. The highest-priced winner since 2005 has been 14/1, so this is not a race for outsiders to be competitive as far as the win is concerned.

Odds of 7/1–14/1 would be the odds range I would look at for this race. Two of the last three winners have carried less than 11 stone. Is this a coincidence or are the lower-weighted horses more favoured in recent years? If you think the latter, then look for a horse at odds of between 7/1 and 14/1 who is carrying less than 11 stone.

There are only six horses under that weight as I write.

You win a special prize if you can guess who has won this race in the last five years. Yes, Paul Nicholls. Four of his charges were heavily odds-on, and the last one was 7/2. Paul Nicholls won because Big Bucks won four times.

This is a race for a horse to put up a sequence of wins. Inglis Drever won three times, Big Bucks won four times. Celestial Halo alas is not running this year. Lac Fontana is the Paul Nicholls runner and if at 10/3 or bigger, back it each way.

300 Newbury – The Hennessy Gold Cup – Nicky Henderson and Barry Geraghty have won the last two meetings, on a 4/1 favourite and then a 20/1 shot. The two winners there carried over 11 stone.

Triolo D’alene is the runner for the Geraghty/Henderson partnership this time, and must be worth an each-way interest, carrying though 11 stone 12 lbs. There have been three winners at 11 stone 12 lbs, so it can be done.

One jockey conspicuous by his absence in the Winners Circle is A.P. McCoy who rides bottom-weight Merry King. Surely the champ is worth an each way investment as he is running out of time to bag one of these Gold Cups.

Paul Nicholls as a trainer is another to shortlist. His recent record is 1-3-2-2-2 in this race. Rocky Creek and Unioniste are his two runners and you can bet Mr Nicholls will be trying not to get chinned… yet again!

I hope the above gives you something to work with at Newbury and shows you that simple past winners analysis can point to possible future trends.

I’m off now to contact the Liverpool board. Ted Rodgers and Dusty Bin are not working. I will put forward Bob Carroll-Gees and Spit the Dog as the management team to lift Liverpool from the doldrums.