The 4 ‘teams’ playing every market (and the tactics they use)

Here’s why I believe financial trading is the best real-world education you can have:

It forces you to deal with reality as it stands.

Not what you *think* reality should be, according to your personal preferences.

It teaches you to quickly develop the ability to absorb unexpected and shocking situations, decide on the best next-actions to take, and simply get on with business.

It means you don’t waste time whining and complaining when the market does things you don’t like, or if you do they don’t tend to last too long as a trader!

The market IS the real world for a trader and he learns to respects it accordingly.

Complaints of “it isn’t fair,” or “that’s not how things should be,” don’t get you very far.

It’s much better to work on taking advantage of situations instead, even if it means overcoming an initial blow to your expectations.

And the first step is learning to see the reality that the market is showing you.

4 Sides to Every Market

So, what do you see when you look at a trading chart?

Price will almost certainly be there. Time may or may not make an appearance depending on which kind of chart you’re using. And there may also be your own personal selection of indicators and studies.

But have you ever sat back to think what these pixels on your screen are actually showing you?

The map is not the territory after all.

No, what the chart illustrates is the aggregate position of every single participant in that market at a particular moment.

Every trader – from investment banks throwing around their huge size all the way down to the micro-lot Forex trader placing his first order – has an influence on the way the chart develops and prints.

The market is basically an arena of two sided conflict. Just the same as a chessboard, a battlefield, a rugby pitch… Take whichever image suits you best.

So we’ve got two sides, both with their own interests at heart. And both prepared to use their own wily ways to win.

But if we zoom in closer again, we can even divide each team into two further broad based camps.

Let’s call them the ‘attackers’ and the ‘defenders’.

A Bullish attacker will take advantage of upwards momentum in the market. He’ll be trading strength – looking to buy on breakouts beyond key levels, that kind of thing.

A Bearish attacker will do the opposite. He’ll look to sell weakness, taking advantage of breaks to the downside (which can be much fiercer than the up-moves).

And the beauty of the attack is that by the time you’re in, the wheels of the market are already in motion. Once the trade is filled you tend to get your results (either good or bad) pretty quickly.

Over in the defender’s camp…

A Bullish defender will try to buy weakness. He’ll be looking for levels of support below the current market that can give a low-risk buying point for his trades.

He’s relying on high volume coming into the market from the big players at key levels to propel his own trades along.

The defender can benefit from lower risk while volatility in the market is down, the payoff is he might have to wait a while before the anticipated move gets underway.

(And that’s not necessarily a bad thing… calling the trade correctly, way in advance of the rest of the market, can be a huge confidence booster!)

A bearish defender of course does the opposite. He’ll be looking for levels overhead to sell into. Finding resistance levels that make sense and selling into that strength as the market gives those levels a prod.

Let’s take a look at some real-world examples now.

Let me give you a bit of background first.

Here’s a chart of Gold I’d been looking at some time ago. It’s a monthly chart so each of those black bars represents a month’s worth of activity. 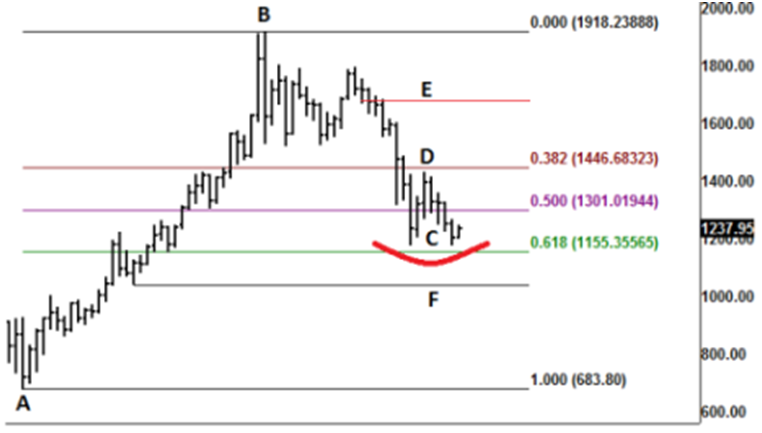 I’d been watching out for a double-bottom pattern forming right inside that area above the red curve.

A breakout above point D would confirm the pattern which then targets the line labeled E.

The big breakout never actually happened (remember how we need to deal with reality!) but that didn’t mean there was a lack of good tradable opportunities.

So let’s get a bit closer to the market now. Here’s a ‘wide-angle’ daily chart showing the recent activity:

We’ll go in closer to the action in a minute, but on this chart you can see we had a decent rally in the most recent weeks. The second point of that speculative double-bottom (labeled A) to the recent highs (B) was a $208.33 move. The market has now retraced back to the 50% point of that move and it looks like that area is giving good support to the market.

So how might a Bullish trader try to take advantage of his buyer’s bias in a situation like this?

Here’s what a Bullish defender could look at: 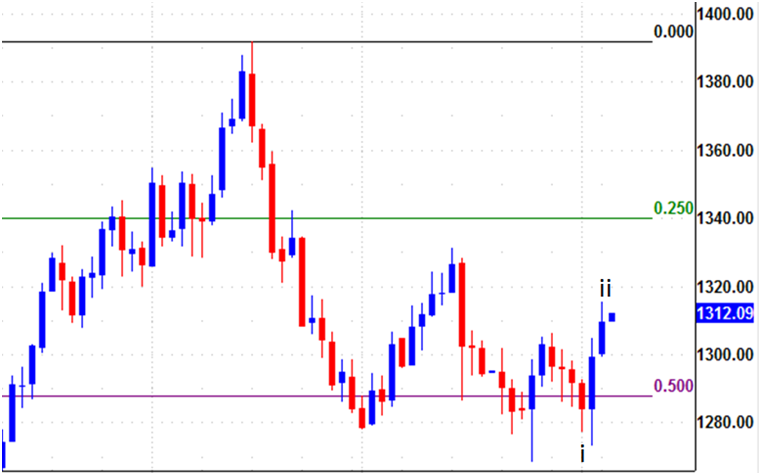 See how that broad 50% retracement area I mentioned (around the purple line) seems relevant to the market? That could offer a strategy for the Bullish defender. You could use a limit order to get you into the market if price takes another dip down there.

A more assertive strategy would be to use retracement levels, either the 50% level or the 38.2% and 61.8% levels, from the most recent pop-up (labeled i to ii on the chart) as your initial entry point.

Keep recalculating the retracement levels if the market carries on going up but once you’re in, pull your stop to break-even as soon as possible, and then try to hang on for the ride!

And here’s what a Bullish attacker could be seeing 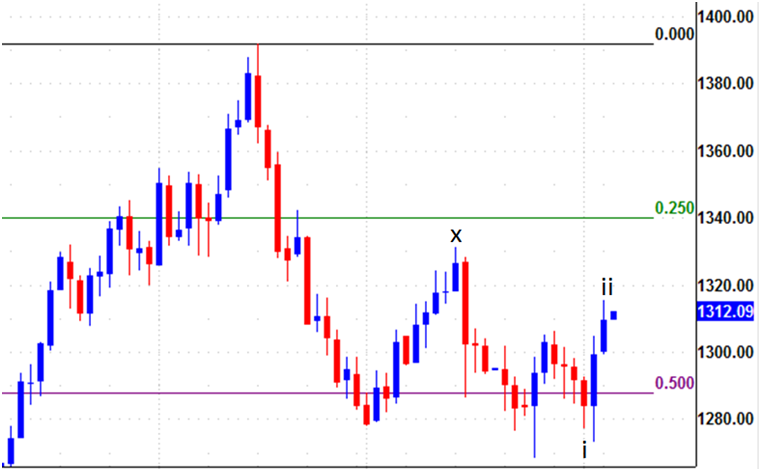 1) Entering a breakout trade using a stop order a couple of ticks above (x) on this chart would target the green 25% retracement level. The attacking trader could enter the trade and pull his stop loss up to breakeven as the green line is touched and then try to hang on for the move higher – targeting those recent highs in Mid March.

2) Enter a trade using a stop order on a breakout above the next pullback to happen. For instance, if the market were to close lower than (ii), place a stop order to get you long a couple of ticks above (ii) the following day. This trade would first target a retest of (x) and then the green 25% line so again, you’ll know when you can pull your stop loss to breakeven as a safety measure.

Of course, if you trade the intraday timeframes there’s nothing to stop you scoping-out similar opportunities on the 4-hour, the 60 minute, or whichever timeframe you’re happy with. And if you keep your risk tight on those trades whilst still holding out for the longer term targets you can start to see some spectacular returns.

So give the attack and defense some thought next time you’re examining your charts. It should give you much deeper insight into the reality the market is showing you. You might also get a flash of inspiration for your next great trade!

As always, shoot me an email with any questions or queries and I’ll catch up with you again soon.