The 4 stages of mash up trading system design 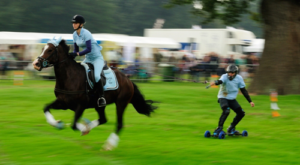 My family all went to the Cheshire Game and Country fair yesterday.

It’s the kind of place where they have gundog displays, ferret racing, and – my favourite – the falconry display.

You see, there’s a rogue buzzard patrolling the lanes around our house. It has already attacked one of the dinner ladies from the local primary school, leaving her needing stitches to her head. And it had my missus pinned-down crouching under a hedge, too.

She said it was dive-bombing her with talons extended, and she had to flag a passing car down to safely extract her to the end of the road!

The hawker said this was all due to the recent proliferation of these birds: there’s so many of them now that they have to defend their small territories aggressively, especially when they have chicks in the nest.

But the hawker had a cunning solution.

If you ever face daily battle with a bird of prey, here’s what to do…

Get yourself a black umbrella and paint a pair of massive birdlike eyes on it. Next time you’re out walking you simply raise the umbrella until safely out of the danger zone (the buzzard sees a huge and formidable foe). Cyclists might also paint big eyes on their helmets – a pair at the back as well as up-front, to avoid sneaky blindside attacks!

So once we’d taken advice on the bird attack problem. we went to see what was going on in the main arena.

Now it always surprises me how there can be so many fringe sports you never even get to hear about. Last time I came to one of these fairs I was captivated by the scurry racing (think horse-drawn chariot racing).

This time it was a practice called ‘horseboarding.’ And it had to be seen to be believed…

A horse and rider drag the boarder around a course at a speed of 30 miles an hour. The board rider is on a type of huge skateboard (I think they’re called mountain boards – ones with big wheels) and he hangs on to a towing rope for dear life while the horse gallops around!

It was spectacular to watch. And there were quite a few spills so the crowd where kept engrossed. No one dared nip off to get a coffee in case they missed the next crash! But the riders were well protected with body armour and padding so no one got hurt.

While horseboarding might sound a bit exotic, it’s just a mash-up of a few different sports when you look closer.

What seems like a revolutionary new idea can actually be a new combination of existing ideas.

It’s the same with business. The story goes the FedEx courier service was a mash up of the regular postal service, and the air-ground hub routing network used by banks to distribute customer’s cheques to each other quickly.

They created a whole industry by bashing together two old ideas!

Now what about trading?

Now as I’m sure you know, there is no shortage of trading systems and strategies available for you to buy. And just like in any industry there are good products and bad products. Do some careful research before spending your money and you can pick up a great system off the shelf.

But there’s another reason pre-designed systems are good. And it can have an even longer term payoff for you…

Exposing yourself to new systems and strategies is a great way to get your own ideas working!

It can sometimes be as simple as lifting an element from one system – it could be an entry signal from your stock trading system – and combining it with a second element from a different system. You might take an idea for a trailing stop loss from a Forex scalping system, for example.

Combine the bits and pieces together to give you a new third system, and the sum can often be greater than the parts.

Using systems you already have access to as a kind of launch pad for your own ideas can be a very valuable educational process. You’ll probably learn more about the markets by taking things to pieces and seeing how they work than just reading about it all in a book.

The key to it all is being open-minded and not boxing yourself in with preconceived beliefs. Try some new things out. The only thing that counts in the end is the amount of money moving in and out of your trading account!

The Dangers of Mash-up Trading Systems

But before you start beavering away, there are two dangers you’ll need to keep in mind:

1) Time cost. You can get lost endlessly tweaking and messing around with your idea and never get it beyond just a vague concept. You’ll obviously start out with a rough idea but you want a quick answer as to whether it’s worth developing further.

2) Proving it works before risking big money. Once you’ve got your idea fleshed-out you need to prove it works. Backtesting will have been a big part of the design process but that’s not enough in itself… Once you’ve got the kernel of a good concept in place it’s over to you to prove it works in real time, under authentic market conditions. You’ll need to forward test it.

And again, it is better you know quickly whether the strategy is worth fully developing.

So once you’ve given a bit of consideration to the potential pitfalls, how might you actually go about mashing together a new system from the components of old ones?

The Four Stages of System Development

Right then, let’s have a look at how you can do this for yourself…

There are four broad stages of system development you’ll move through.

The four stages are: Think, Test, Optimise, and Assess.

Think – because you’ll obviously need an idea to work with in the first place. Through your market observations or knowledge of other systems you’ll start to notice recurring patterns and quirks of the market. It’ll get you thinking… “Hmm, I wonder if there’s a way of creating a profitable edge from that?” This will give you the raw material for your trading concept.

Test – number crunching and backtesting. Can you get your rough idea to show potential?

Optimise – if your idea made it to this stage you can spend a bit more time on it. Test different parameter values further to uncover the optimal settings.

Assess – you’ll have the complete concept ready at this stage. It’ll still need the rough edges smoothing off but take a closer look now – is this right for you, is it a system you could happily trade?

And if your idea makes it through assessment, congratulations! You’re ready to take it through to forward-testing. Make sure it makes money in real time, under live market conditions, and you might just have created your personal money-printing machine.

Keep an eye on the clock on Friday. It’s the big one – US job numbers!

Trade safely and I’ll catch up with you next time.