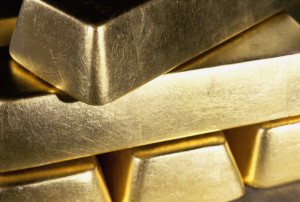 PLUS: What this market visionary really thinks about Gold

And here we are again, markets back to full capacity and a brand new year ahead of us. I sincerely hope you and your family had a lovely Christmas and I wish you a very happy and prosperous 2014!

But just what WILL the markets have in store for us in the coming months? It’s the big question on most trader’s minds at this time of year.

If you’re like me, you’ve probably been reading lots of predictions and prophecies in the financial media over the last week…

And you know what they say – if you can’t beat ‘em, join them!

So apart from the usual currency market ups and downs we thrive off as traders, here are my three big themes for 2014. The ones I’ll be keeping a close eye on this year:

1) Opportunities in Gold: Unloved and cast aside like a broken toy, Gold’s been having a horrid time over the last twelve months. But will the picture change in 2014?

It’s over 25% down off its highs – its biggest loss in thirty years – but physical gold still retains status as the ‘currency of last resort’. If the wheels really come off the global financial system, where else exists such a pure flight to safety?

And although it’s not strictly a ‘foreign’ currency, most Forex brokers do offer a market in Gold. You can typically trade the relationship between Gold and the US Dollar, the British Pound, the Swiss Franc or the Aussie Dollar.

2) Crypto-Currency trading: I’m talking Bitcoin and the like here. In fact, Bitcoin is trading back above $1000 as I write. It sailed right back up off its recent lows after China threw that spanner in the Bitcoin works just before Christmas.

I think we’ll see a spate of brokers offering new markets in Crypto Currencies this year, and not just for Bitcoin. Plus500 have offered a Bitcoin CFD (Contract for difference) for a while now. They’ve also recently introduced a CFD for Litecoin.

Avatrade, eToro and Markets.com also offer Bitcoin derivative markets (letting you trade the volatility of the market rather than buying actual Bitcoins themselves). And sure enough, the Binary Options brokers are getting in on the action too – a very interesting proposition. And that brings me neatly onto my third theme…

And that’s one of the main reasons we can now look seriously at Binary Options as an alternative trading vehicle for our currency trades.

So outside of the currency markets in general, those are the three areas I’ll be monitoring and looking to take advantage of as we move into the New Year. And I’d like to explore each theme for you in more detail over the next few weeks…

I thought we’d start today with my ideas on Gold and them delve deeper into the Crypto Currencies next week.

(In fact, I’d like to start running a regular ‘Crypto-Currency Corner’ for you right here in the eletter. We’ll keep tabs on trading opportunities in the alternate currency industry as it grows in 2014.)

So anyway, back to the task at hand…

Let’s have a look at Gold

This all stemmed from a Jim Rogers interview I listened to over Christmas. Now if there’s one market master I truly admire it’s Jim. He’s not strictly a trader; he’s more of an investment visionary. But he’s got an uncanny knack of calling the big trends at a very early stage.

Here are Jim’s thoughts on the current economic situation the West finds itself in:

“We are all floating around on a sea of artificial
liquidity right now. This is not going to last“

He’s referring to the Central Banks churning out money to prop the economy up. He goes on…

“Eventually the markets will just say, ‘We’re not going to play
this game anymore’, and we’ll have a serious collapse.”

“I’ve owned gold for many years, I’ve never sold any gold and
I can’t imagine I ever will…. Everybody should own some
precious metals as an insurance policy. I would urge
them to go buy something”

Now by his own admission Jim is usually off with his timing. Like I mentioned, he spots things VERY early. He has usually calculated the forthcoming trend before the old one has even finished.

And to be fair, his comments on gold were aimed towards treating gold as an insurance policy. Somewhere to squirrel your funds away if the system starts to fall apart.

But financial charts do have a way of illustrating forthcoming disaster before it happens. It’s all very well pointing it out in hindsight of course, but when the smart money – the early movers – get a first sniff that the wheels are coming off, their funds get moved out of speculative assets – like shares – on a flight to safety into ‘safe havens’ like gold.

You’ll be able to see their trading volume create accumulation patterns on the gold chart, suggesting a baseline the market can rise from. And that creates a mid to long term trading opportunity for you.

I think it’s fair to say we have the potential for some twitchy times in the months ahead, so here’s what I’m watching on the gold chart: 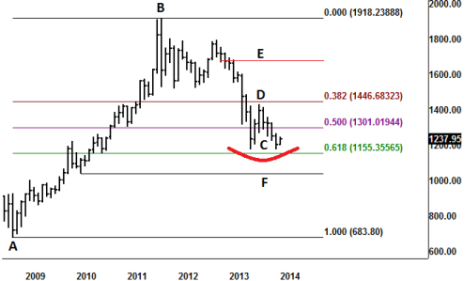 We’re looking at a monthly chart here – each bar represents a calendar month – so the scope is for a mid to long term trade.

If you take the 2008 lows (point A) and the 2011 highs (point B) and drop some simple retracement levels onto that move you’ll see gold is currently trading right in amongst the lower levels – a potential area for the market to establish a new base.

(I plotted the 50% retracement level and the Fibonacci 38.2% and 61.8% retracement levels. They are all widely followed analytical tools – it means the market at large should be paying some attention to this area.)

If you look at point C you’ll see the potential for a double-bottom pattern (inside the red cup). No promises – we’re not getting into crystal ball gazing here – but if the double bottom does hold and the market moves above point D (the ‘official’ trigger level for a double-bottom trade) the technical target is the red line labelled E up at $1,697.00.

My idea is to try and enter the trade early – if and when we see some bullish accumulation activity on the daily charts – and already have built a low-risk position if point D does get taken out.

The alternative scenario is we don’t see any bullish activity step-in and gold falls further. In that case I’ll be watching for buyers to come in around point F (black line, $1088.00). It’s an old level of support.

But there’s only one way of finding out if it’s the right call – let’s see what gold dishes out in the weeks to come!

When Nero came to power in Rome A.D. 54, Roman coins were either pure silver or pure gold. By A.D. 268 the silver coins contained just 0.02% silver and the gold ones had disappeared completely – by then smart Romans had hoarded the gold away.

What the Roman bigwigs did actually gave origin of the word “debase” (as in ‘debasing’ the value of the pound sterling).

So I guess some things never change… Governments will keep running out of money – and they’ll keep coming up with cunning schemes to ‘create’ more!

As always, don’t hesitate to drop me an email with any comments or questions.