Sorry, but I have to make this confession in public… I wish I’d never met Julie… and my wife agrees too!

In the autumn of last year, I decided to make a big life change.

After years of indulgent eating and drinking – and a lot of sitting at a computer writing emails like this – I was going to get fit… properly fit, in a way that I’d never been before even in my younger days.

That’s when I met Julie.

Now I know from the tone of my headline you might be bracing yourself for some kind of confession. Maybe I had an affair. Or perhaps Julie’s the worst personal trainer in the world and I’m angry about it.

Or perhaps I’m writing this on crutches, or I’m now 20 stone and have five chins, or I’m so addicted to exercise I’ve virtually abandoned my family… and it’s all Julie’s fault.

And that’s precisely the point.

You probably want to find out what’s been going on. Or at least if you’re reading this far you’re a bit intrigued.

That’s because I’ve used a proven psychological strategy that can lift responses in just a few words. It’s something that you can put to very good use in everything you do online – from email subject lines and blog post headlines to About Me pages, tweets and Facebook posts.

I can show that it works too. Because recently Julie asked me to write her a testimonial that she could put on Facebook.

So here’s what I wrote:

I wish I’d never met Julie (and my wife agrees too)!

Since Julie Winterton first became my personal trainer/nutritionist in September 2015, my life has gone downhill…

I’m also stronger and more flexible… oh and my energy levels are consistently high, I never suffer from post lunch slumps at my desk and generally have far greater focus and concentration at work than at any time in the last 20 years.

But apart from all that I’m really not happy…

First, thanks to Julie I’ve had to give away my ‘fat wardrobe’ to charity – I’m talking dozens of perfect good L and XL T-shirts, oversized Hawaiian shirts and trousers with elasticated waists. Gone. And I’ve had to spend a small fortune replacing them with skinny jeans, fitted shirts and the kind of clothes I haven’t been able to wear since I entered my 40s (8 years ago!).

Another really annoying consequence of working with Julie is having to explain to family, friends and work colleagues I haven’t met for a while how I lost so much weight/gained muscle/definition blah blah blah…

While this might sound like a nice problem to have, the number of people who finally admit that I was a bit porky, stout, stocky has come as quite a shock.

I mean why couldn’t they have told me that before!

There’s more to the testimonial, but I’ll post it underneath this email as I’m sure you get the picture by now.

There are really three factors at work here:

• Reverse psychology – you suggest something that’s the very OPPOSITE to what you want a person to think in order to persuade them. It’s a bit like how saying to a child, “Don’t push this red button” is almost certain to result in them pushing the button.

• Contrarianism – you wilfully go again the grain of common wisdom, or what is usually said. Saying that you hate a personal trainer and they’ve made your life worse is definitely not what people expect or see very often. It’s a way of standing out, being different and unique.

• Intrigue – people are naturally nosey and curious. If you suggest that there’s a story to be discovered (particularly if it involves something shocking, confrontational or unusual) then they get this irresistible urge to click or read on.

Try using these three elements in the next thing you write for your business. It could be a social media post, email subject line, sales letter, squeeze page, press release… really it can be used in any communication, whether it’s a sales promotion or a news update. See what happens to the response.

In Julie’s case, as soon as Julie put this testimonial on Facebook she started getting new enquirers, as well as responses from her followers. This got her into fun online conversations that helped strengthen her relationship with those followers.

Of course, I could have written: “I’ve lost 20lbs of fat in 6 months thanks to Julie Winterton” and that would have been okay. It’s a classic format. It’s very specific and has a strong benefit.

However, times are changing since the old days of direct mail. Twenty years ago that might have been enough to stand out.

How many fitness-related businesses use that kind of headline?

How many times have you seen that sort of claim in newspaper articles, adverts and brochures?

This approach is so common that it has lost much of its impact. People expect to see this kind of testimonial or headline. Almost to the point that it becomes invisible.

Why should they interrupt what they’re doing to read something that they’ve seen before?

I’ve written a lot to you recently about the problem with information overload in the new internet age. The constant deluge of messages. The huge amount of competition. The low attention span. The addiction to novelty.

It’s a real problem for small businesses and entrepreneurs.

This is why you need to work a bit harder to stand out.

You need to shock, surprise, delight and entice people with all your communications, otherwise you’re going to be drowned out by the ever increasing noise of the internet.

This is what all those ‘clickbait’ advertisers online understand very well.

Why you should never go to Barcelona

Below is an advertorial for a villa-rental company. The idea that they’re trying to sell rentals in Barcelona.

Rather than go for something along the lines of “Discover the delights of beautiful Barcelona” or “10 Reasons to Visit Barcelona” they’ve used this: 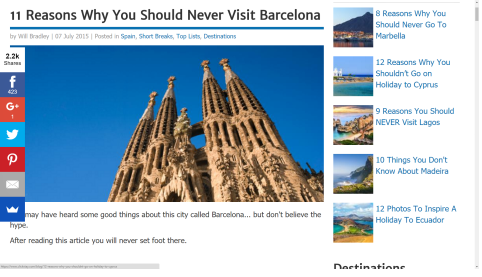 The article then uses a series of reverse psychology bullet points…

Pesky guys going round the streets selling beers. What could be more annoying than being able to buy an ice cold Estrella for 1 euro whenever you want? Just leave me alone…ok?

The funny architecture… All those swirls and spires, I just don’t see the point.

The incredible variety of seafood dishes will mean you’ll find it impossible to choose what to eat.

Troublesome cyclists are everywhere. It’s so cycle friendly you will see a lot of these menaces.

Cannabis clubs. This flagrant abuse of the rules by these dirty hippy criminals makes me sick to my stomach…ahem.

You can see where they’re going with this can’t you?

They use it because it works.

But a word of warning…

The problem with many of these clever little clickbait hooks is that they also get overused All the other clickbaiters pile on. 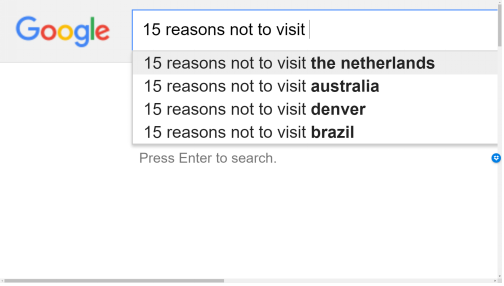 The “15 reasons not to” line has already become a cliché!

So the key is not to do what all the clickbaiters are doing, but instead, find your own unusual take on things. Find something to say that very few rival businesses and websites are saying… then use that to grab attention.

That’s it from me. I’m off to do squat exercises until I have a backside like a Kardashian. If you’re interested in my full testimonial for Julie, it’s pasted below.