Profit from the World Cup!

You may be aware that the 2014 World Cup begins tonight, with Brazil playing Croatia in the opening match. 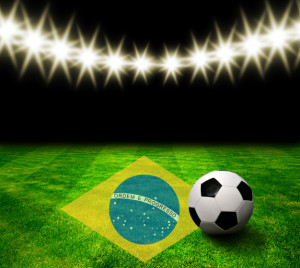 You are probably already inundated with World Cup related adverts and pretty soon there will be constant news reports about upcoming games, scores and results.

If you love football then you will be in your element; if you hate it or are indifferent to it, then less so!

I used to hate World Cups and Olympics when I was a child; this was because my mum loved sport and would devour whatever sport was on, with the exception of horse racing and rugby.

Other than those two sports, anything went: cricket, boxing and even sports such as curling!

The problem was that when a world sport was staged live, it used to mean that many programmes I loved would be stopped for the duration.

So as we only had one TV in the house and my mum ruled the buttons (not ‘remote controls’ – they were not yet around), we either ‘put up or shut up’.

Actually, I do have fond memories of sitting besides her trying to pretend I was interested in which gymnast was most skilled, or which runner ran the fastest around a track.

But, to be honest, I usually soon got bored and picked up a book to read instead.

Of course, nowadays, with hundreds of channels to watch, it is not a problem: I tend to record all programmes I want to watch on my Sky box and am able to fast-forward through the adverts and references to programmes I have no interest in.

As a result, I am often oblivious to which games are playing when.

With Sky, catch-up services, and box-sets, there is need for anyone to miss out on their favourite programmes, despite watching any live sport.

One way I am often reminded that there is something going on is via my sales on Amazon and eBay.

Suddenly books concerning certain sport personalities sell repeatedly; so admittedly, it’s nice to profit from events that hold no personal interest to me.

If you have any books or DVDs that you haven’t got around to listing about current and older football players, now is the time to get them on the system fast.

Take advantage of the interest that manifests from events such as the football World Cup!

If you are wondering how it is that I sell popular titles repeatedly, you may be aware of my latest course Copy Paste Profit (CPP)…

Using CPP, I am able to list several copies of the same title, despite not actually owning or even handling that title – or any other – at all!

I list an item: if it is popular by way of repeated sales, I just keep replenishing the quantity available for sale.

Usually if a world event or a popular statesman/celebrity dies, there is a surge of interest that can result in repeated sales, thus profit and increased income!

For example, at the moment, sales of famous past footballers are selling very nicely.

Also, when Nelson Mandela passed away last year, I sold several copies of his autobiography The Long Walk to Freedom. I probably made over £200 in profit in a short time, just selling this single title, yet, I personally did not own a single copy of this book.

In fact, if you buy books to resell, it’s not often that you will have multiple copies of the same title to sell, thus you will miss out when a surge happens.

However, using the methods explained step-by-step in my CPP manual, which basically involves undertaking a little research, you can often have as many copies as you need to profit from surges of interest.

Great profits can be achieved without having to invest any money upfront, store books, or physically post them.

Indeed, you won’t leave the comfort of your armchair and will not handle a single product. You press a few keys and someone else does all the work.

Does this sound up your street? If so, don’t miss out: take a look at Copy Paste Profit today…