The Australian Open will be upon us on 13 January and this affords me a great opportunity to re-unite you with ‘DRT for tennis’.

The time difference means that it is perhaps impractical on this occasion to use this strategy, unless you are a night owl or an early bird – but it’s something you can take with you for 2014 and use in all of the major tournaments.

It’s an easy-as-pie strategy and turns a low odds bet into extreme value.

Select your tournament of interest. I always choose the major tournaments, as the big guns are up and firing for it. Here I select the Australian Open Men’s Tournament. 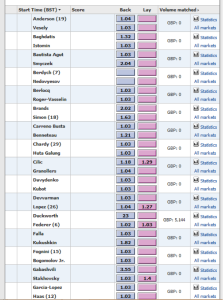 The odds are very illiquid – some 3 days before the tournament. Our focus, though, will be on the seeded players. They are easy to locate. These are the players with a number bracketed next to their name.

Your job, quite simply, is to note the matches featuring these seeded players and wait for a potential ‘shock’.
Let’s say that Duckworth, for example, has won the first two sets against sixth seed Roger Federer. Highly unlikely, but Federer has had slip ups in previous first and second rounds.

It is in cases like this that you can create value. Here are your options:

The great point about Grand Slam tournaments is that men’s matches are a best of five sets, meaning if a player is two sets down, he still has a chance.

I’ll actually be monitoring how many players win the third set after being two sets down in men’s matches.

This strategy is even more effective in women’s tennis. Why? Well their matches are the first to two sets.

So, if a seeded player has lost the first set in the first or second round of a tournament, she must win the second set. If she does not win, she is out!

I’ll be doing some late-night trading myself from the 13th onwards, and those of you who are available, why not join me on Twitter @whatreallywins where I’ll be pointing you in the right direction with regards to potential value bet opportunities.

Well not quite this week, for those following my free-for-WRWM-readers each way probability selections.

It’s been a ‘Gillette’ week for the each way selections: a close shave. January 7th saw a three-quarter-length second at mouth-watering odds of 24.71 to win. As if to emphasise why each way betting is so appealing, I still got paid odds of 5.8 for this horse placing.

Yesterday, we had a 7.94 odds horse finish a nose second.

I’m happy to report that a number of horses are finishing in the top three. This ensures the betting bank is not eroded as we await another big-priced horse. Try it out for yourself using the instructions from the last eletter I sent out.

I’ll be elaborating on this ‘probability’ betting in January’s What Really Wins Money newsletter, which is under construction as I write (as long as my 5-year-old nephew avoids my gaze and I don’t end up playing in the garden!).

The Statman has sniffed out a great handicap horse racing statistic which has been jaw-droppingly profitable over the last 10 years. Selections are easy to find, and there are about 100 per year. This does, though, seem to be a case of quality over quantity.

The Systems and Tipsters Update will point you in the direction of the best tipsters out there, and the ones who couldn’t tip the winner of a one-horse race.

Join me at What Really Wins Money this year if you can! We always find the profitable betting angles year after year.

Talking of profitable betting angles, I’m off now to lock myself in my room and do my DRT football research until I’m pounced upon by the ‘little people’ – my nephews and nieces.