Profit by laying the shortest odds in the biggest field…

I hope you enjoyed my Mayweather vs McGregor ideas in last week’s eletter.

I am pleased to report that a few of the angles profited well. A little more profitable than the Past Winner trends, which are odds-based. On occasion I was only a point or so shy of the winner (i.e. a 5/1 horse won when I highlighted 4/1).

The Mayweather profits remind you that laying is a credible way of making money. The logical way to make laying pay is to lay the shortest odds in the biggest field.

I have adopted this idea profitably over the last couple of years by a simple strategy of laying the favourite in the biggest field of the day!

Sometimes the odds in a Correct Score market can be high, so delay. Perhaps get involved in the markets at halftime? Lay the 0-0 at halftime, for instance: the odds will be far shorter than pre-match and 0-0 will likely be the shortest odds in the market at halftime.

For the second half, you will have 18 other scorelines running for you, just as we had 30+ markets running for us the Mayweather vs McGregor markets.

Did you take a look at the outright winners markets in the Premiership in light of a few worrisome early results for the top teams?

I pointed out Liverpool’s odds to win the Premiership hit 22 in reaction to a 3-3 draw. What an over-reaction!

As you can see, Liverpool re-righted the ship and those odds of 22 have dropped to their original odds of 12.5.

You might want to, as I suggested originally, scout the European league outright winner markets for stories like Liverpool’s?

I would use Betfair as it allows us to, say, back Liverpool at 22. And then lay Liverpool at 12.5 to guarantee a return if we want to trade out. 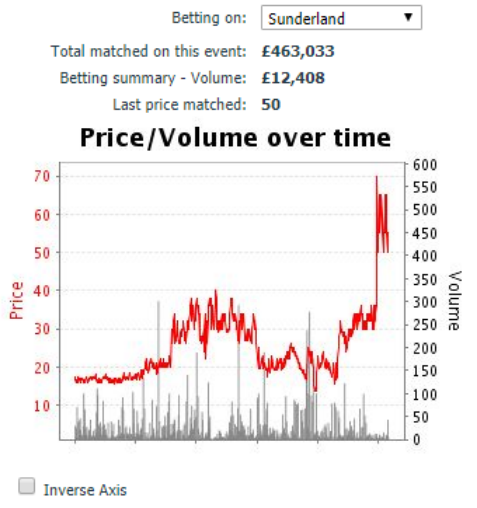 With only 5 matches played in the English Championship, Sunderland find themselves at odds of 48 to back to win the title. This for me is value, given that they were newly relegated. Whilst not as obvious a chance as Liverpool of winning their league, this presents a good price for me.

Is there a team around Europe who has started poorly (preferably losing points by way of draws rather than losses), that springs to your mind, that you can back in the outright winner market?

Have you been interested in US Open tennis? Grand Slam tennis is a great vehicle for betting. I have written about it in the past.

The simple formula? Take a top 10 player. Watch them cock up their first set – better yet, get their serve broken in the second set. Back them at bigger prices in-play. Sit back and watch the expected recovery.

World Number 9 Kuznetsova provided us with odds of 10/1 in running and she still won!!

You can get players’ rankings at www.matchstat.com.

And now a time, from a horse racing perspective, to focus on Jumps racing, which is what I will be doing in the upcoming weeks here in this eletter.

I’ll be sharing some ideas on how we can profit this winter from Hurdles and Fences in the UK and Ireland, as well as National Hunt Flat Races (Bumpers) which might offer a unique angle all of their own! Watch out for those!

The post Profit by laying the shortest odds in the biggest field… appeared first on What Really Wins Money.