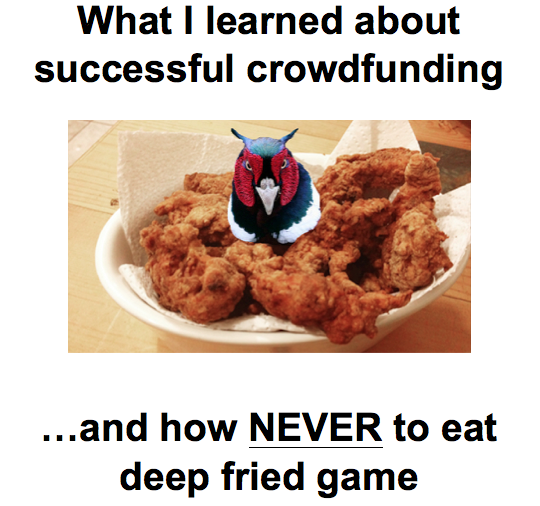 Before I tell my unpleasant pheasant story, a quick podcast plug…

If you didn’t know already, I do a regular-ish podcast. You know, kind of like a radio show, but without ads or annoying jingles. My podcast is called The Laight Show. The latest episode is out now and if you have any interest in email marketing, it’s definitely worth downloading.Go to iTunes or SoundCloud to listen.

Last week I had a business lunch in a London pop up restaurant with a man who works at a successful publishing company.

“Yeah, Nick – big deal – I presume you do this sort of thing all the time.”

There were two unusual things about the meeting.

First off – on a whim – I ordered the very first thing that caught my eye on the menu, which was described as ‘KFP’.

It was so ludicrous I thought that I’d give it a try.

Besides, I felt locked into the purchase now I’d enquired about it – a classic example of how marketing works!

This turned out to be a really bad decision.

I’ll explain why in a moment – so hold on!

The second unusual thing about the meeting was the publisher himself – or, rather, how his company makes money.
You see, pretty much since the invention of the printing press, the traditional model of creating books works like this…

It’s not just a publishing thing.

This is the same for any kind of product or business really, offline or online.

There are two downsides to this…

First, if you get it wrong, you waste time and money on a product that doesn’t sell.

It’s the sort of outcome that can destroy a business.

Secondly, it tends to result in a very conservative style of business.

You sell what’s already selling, following the footsteps of others, and never really trailblazing or breaking cliché and expectation.

However, thanks to the new principles of online marketing, this company can do it the other way around…

This is known as crowdfunding.

It’s been around since 2006 but it is really now coming into its own, allowing small businesses to accelerate their growth and find loyal customer bases.

While mainstream publishers are seeing big hits in revenue from many challenges, including the rise of ebooks and blogs, illegal downloads and shortening attention spans (as I discussed the other week)… crowdsourcing-based publishers are growing.

Some are fully reliant on crowdfunding, but there are small presses who now use it to:

But as I waited for my Kentucky Fried Pheasant, my fellow diner revealed an even bigger benefit that had not occurred to me.

A hardback book is normally around £20 or more, while a paperback around £10 or more… and yet using this model of online publishing the AVERAGE advance sale payment for a single book is £40.

That’s double or even quadruple the profit!

And here’s why this happens…

A little bit like I “invested” psychologically in the idea of a Kentucky Fried Pheasant when I was talking to the barman, customers of a crowdfunded book invest in the idea of the project.

They want to be part of the whole venture, helping bring something to fruition that might not exist without them.

They feel like benefactors, co-creators, producers of something meaningful, that has purpose and value in the world.

For a simple reward, like getting their name in the back of the book, exclusive email updates from the author, or a discounted previous book as an extra, many people are willing to pay far more for a product than they would normally do – and be delighted to overpay.

Best of all, crowdsourcing is something you could do without needing to build your own website or worry about taking payments and legal issues.

There are readymade platforms you can use including:

In his book The Inevitable (I’ve mentioned it a few times to you recently – worth a read!), Kevin Kelly explains crowdfunding is the beginning of the 12 unstoppable trends (or ‘forces’) going to shape our future.

Not only has crowdsourcing brought the customer into the process of making a product happen, and feeling ownership of it, but he also believes the future businesses are going to bypass bank loans and instead pre-sell shares to people across the world who have the same vision, the same passion, the same sense of purpose.

This is true for whatever you try to crowdfund.

To succeed you must have a clear goal, a mission and a noble cause that people can rally behind.

You’re never asking for money so you can ‘have a great business’ or ‘make a fat profit’.

You’re asking for money so that you can enable an amazing new service to exist, one which will make people’s lives better.

I’m looking at all of this in much more detail in the upcoming issue of Digital Upstart, as crowdfunding is a fantastic new approach that could help you achieve goals you never thought possible.

Plus, there will be an accompanying – and FREE! – bonus strategy report for you to download from this website, showing you how to plan a 90-day crowdfunding campaign… so keep an eye out for that here as your paper copy of DU drops through letterboxes this weekend!

Back to the KFP…

Anyway, so around this point in the conversation the Kentucky Fried Pheasant arrived…

It looked like Kentucky Fried Chicken, which I guess was to be expected. But they’d served it on a board, with a mound of chips.

As I went to cut into the KFP the chips started to slide off the board and onto the table.

My fellow diner had ordered a burger, but he proceed to eat it really neatly by cutting wedges out of it with a knife and fork…

Meanwhile, my side of the table was an explosion of chips, slithering strands of coleslaw and bits of crunchy coating scattering like gravel!

I realised that the only way to eat KFP was like KFC – namely, grabbing the food and tearing into it with my teeth.

So as we discussed the brave new paradigms of online business, I was sat there like Henry VIII, chomping on cooked game bird, with grease dribbling down my chin.

Next time I’ll order the quiche.