Lose less and win more is the objective of every trader and pro gambler. More and more high tech ways are now coming to the market whereby they advise adjusting stakes depending on previous winning patterns and recent strike rates.

It’s an approach that’s works very well for the most part. The only problem is that it does require a 1000 data samples fed into it before the algorithm is triggered.

A way round this is to ‘pre load’ the software with a 1000 pieces of data in order that users can start immediately with whatever system or service it is recommended for and that’s what I am working on now! It not progressive staking as it would have a simple high of 2 points and a low of 1 point and can be added to many of my strategies.

For now though it can be operated in a raw manual form with good success. For example; I noticed one of my plans in my Quick-fire betting course (The 50/50 plan) was running way above norm and I took it upon myself to reduce stakes by half and it was a wise move. Why? Well one or two bets later the inevitable drawdown appeared and so luckily I saved quite a few points. Then after a losing run of 6 I decided to up my stakes again believing an upturn was due and 3 or 4 bets later I had a really good run and I had 2pts on all of them – Hooray!. Now it’s not an exact science as they trick is knowing when to increase and reduce stakes but here is my rule of thumb;

If the average losing run for your plan Is ‘6’ for example before normally getting a winner or mini winning run, then consider upping your stakes to the 2pt max after the 6th losing bet. Likewise, if your ‘average winning run ‘NOT YOUR LONGEST WINNING RUN’ is ‘4’ for example then when you’ve hit ‘4’ in a row consider going to 1pt bets until you hit a series of losers, in which case you revert back to 2pt max bets.

It takes a little practice but boy it can really increase your bottom line once you get into knowing how the win/lose pattern of your system or service develops.

One things is certain from reading all the above is; DONT INCREASE STAKES AFTER A WINNING MONTH as you are going in the total opposite direction of mathematics.

Find the Winner In The Most Difficult of Races (Update)

Now a few weeks back I give details of s system that is doing really well. However I had quite a few questions on it so just want to answer those  and also give a recap for those that missed it 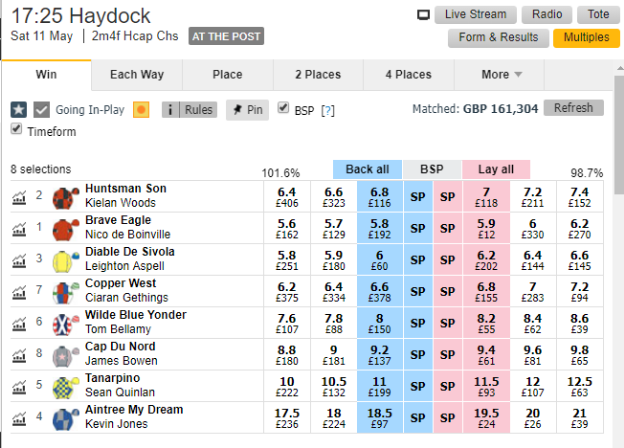 1). We check to see which selection out of all the runners has become CLEAR FAVOURITE (if any).No joint Favourites. It has to be market leader at the time of taking your second screenshot around 10 minutes before the race off time. Don’t worry what happens after.

2). Starting from the Outsider FIRST, in this example ‘Aintree My Dream’ we start working down the selections and STOP at the first one that has reduced in price from its earlier price.

Looking at our example, we can see that Aintree My Dream was priced at 20.0 to back (Blue Column) when the first screenshot was taken an hour before the race. Then 10 minutes before the off was down to 18.5 (A 1.5 pip movement downwards).  Therefore, that has come down in price and is our selection. If it had drifted out in price then we would move onto the next until we reach the one that has reduced from its earlier price.

1). Any horse that has now become clear Favourite from the two price frames.

2). Starting from the OUTSIDER FIRST, we look for the FIRST horse that has moved DOWNWARDS in price from its earlier price and stop at the first one that has.

On that basis our two selections for Dutching are: