Kill all clichés and get noticed 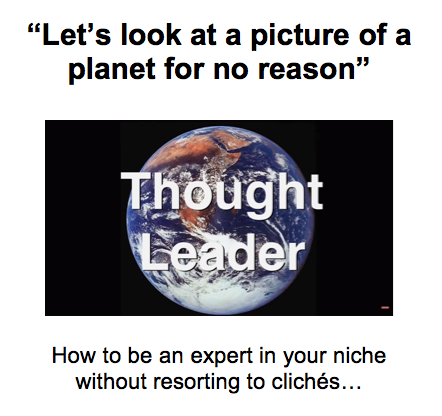 Someone sent me a link to a video yesterday.

And it makes a really good point for anyone trying to use content to grow their business, whether it’s videos, blog posts, emails or podcasts.

If you’ve got 4 minutes and 15 seconds (and you can turn the volume up), take a look (I’ll give you the link later).

First, let me explain why this should be seen by EVERYONE who tries to market themselves as an ‘expert’ or ‘authority’ online – and why it matters to you, even if you don’t consider yourself an authority at all.

The video is a spoof of those TED Talks, which have been around for a couple of decades now.

I don’t know if you’ve watched one of these conference speeches before, but an expert gives a lecture about an issue in science, business or social issues.

Some of them have been good, with genuinely interesting ideas.

But what has happened is that they’ve become so formulaic, so self-important and studied, they’re now being mocked…

‘A Parody Of Every TED Talk Ever’

In this brilliant video a man comes on the stage and says: 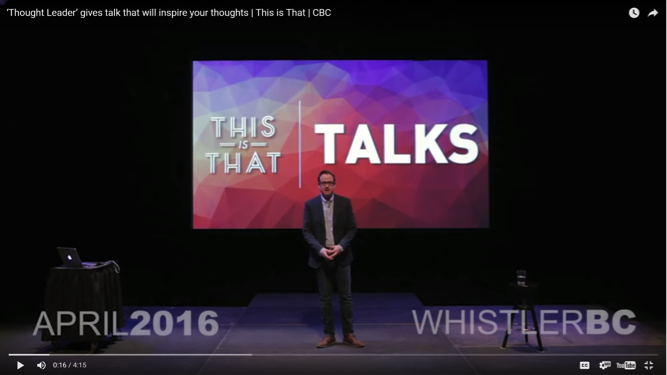 He then proceeds to follow all the clichés of the TED Talk formula, from clasping his hands and pacing the room, to fake chuckling at his own jokes, to showing pointless slides.

“Everybody knows that a presentation is more legitimate if there are slides,” he says.

Then he shows an image of the Earth. “Let’s look at a picture of a planet for no reason,” he declares.

The funny thing is…

These techniques really work – or, rather, they did once when they were new. Moving around the stage instead of standing behind a lectern was a fantastic way of seeming relaxed and dynamic.

Showing dramatic images on a screen and overlaying them with numbers and quotes made such addresses seem more important and significant than they actually were.

But, like anything, if a technique or formula gets overused to the point where it can be satirised in this way, it begins to LOSE authority, LOSE impact and LOSE credibility.

If everyone is using the same communication tricks, then they lose their ability to make an impact.

They stop working and end up having a negative effect.

This is so true online, where people make snap judgements about whether to stay on your site to find out more, or just think to themselves they’ve ‘seen it before’.

For instance, a few years ago infographics were genuinely attention-grabbing and an unconventional format to present information.

Websites with infographics came across as more authoritative. And there is still a very important role they can play to distil statistics and complex relationships into simple visual summary.

But as more and more people started to use infographics just to make themselves look the part, they lost their novelty and power to grab attention…

Most of them become boring.

Or rather, they became a bit less interesting than people assumed they were.

They got shared around a lot by sheep-like bloggers – but was anyone really paying attention?

And look – now they’re being parodied too. 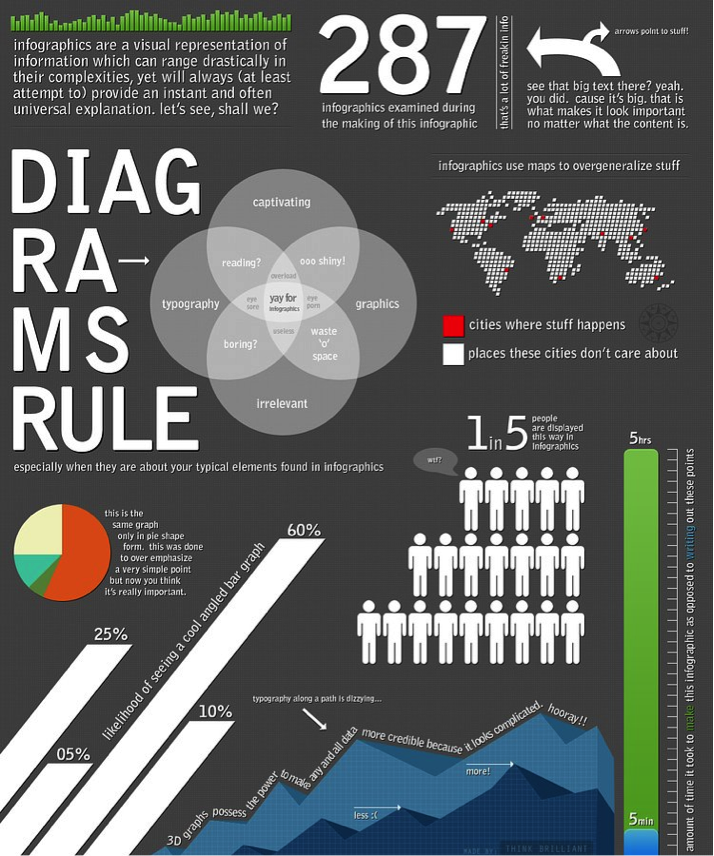 This doesn’t mean you can’t use infographics – but it does mean that using one WON’T automatically make you seem more interesting and credible than your rivals… unless you really work hard to disrupt the conventions and clichés.

For instance, I doubt you’ll be able to watch a TED Talk now without thinking of the parody version.

It’s similar to how I find it hard watching TV news and sports presenters after I’ve watched an episode of Alan Partridge.

However, when things become clichéd, it presents you with an opportunity to undercut the big players…

Just imagine if someone shambled onstage during a TED Talk and broke all the clichés.

Perhaps they use no slides, but hand-drawn illustrations instead.

Or they sit in a chair during the talk, or stumble through their words, yet still manage to get their points across.

In the slick world of TED Talks, this would get someone noticed.

Doesn’t that make them a thought follower?

Which brings me to my point. (Yes, there is one!)

I don’t care whether you sell vintage garage rock 45s on eBay, or if you’re a watercolourist, a gardening tool inventor, restaurateur or blogger… if you want to get noticed online and followed by people who pay attention to what you say, you have to show some kind of Authentic Authority.

That means being someone who can inspire your readers, followers, subscribers and customers in some way.

But that doesn’t mean pretending that you’re some world-changing expert or hiding behind graphics, gimmicks and clichés…

It means being yourself, showing that you care about your subject, that you have passion and you’re committed to what you’re doing.

Take it from a passionate podcaster! As you know, I recently made my first forays into podcasting with The Laight Show (you can listen to them here and subscribe on iTunes here).

I’ve had some great feedback… and some not so great.

And that’s actually good news! I know a professional fiction author who says that if he doesn’t get some bad reviews among the good, he’s probably doing something wrong.

Why? Because in a saturated fiction climate, it’s better to please a small, dedicated niche market with a strong idea or an experimental approach than to water it down in an attempt to please everybody.

And look, I’ll be the first to admit. I’m not a professional presenter. I’ve had no radio training.

I’m foremost a writer and publisher, so this podcasting game is new to me, and I find myself stumbling over lines or saying “ummm”.

Quite frankly, I don’t care.

I believe that my subscribers want knowledge, insight and ideas based on what I’ve learned in more than 20 years of publishing, copywriting and marketing.

And they want to hear from the real me, not a fake version I’ve made up so I sound slick on podcasts.

So before you put together another blog post, email, free report, video or piece of audio, first ask yourself…

What is it that your potential prospects really want? How can you offer them specific help, insights and tools to help them achieve their goals?

Worry about that factor more than how well-written your blog post is, how slick your website looks, or how fantastic your hair looks in a YouTube video.

What kind of person do your potential prospects like and trust in real life?

For instance, a fantasy board gamer is probably more likely to trust a scruffy guy in jeans to sell them a game than a guy in a suit who drives a Porsche.

Exploit those points of similarity to show you’re like them and understand how they see the world.

Then finally, ask yourself…

What is everyone else in my niche or field of business like, and how am I different?

This is where most people miss a trick…

Because it’s sometimes that unusual, unexpected aspects of your personality that make you stand out in a crowded online world.

For instance, you could be a yoga teacher who is overweight, or a motivational trainer who stammers or a CEO of an accountancy firm who hates wearing suits.

Rather than hide these quirks or flaws, you can make them a point of difference. Just because everyone in your industry or niche acts, speaks and thinks in one particular way, it doesn’t mean you have to.

After all, the more like other people you are, the less you will be noticed.

For more advice on this, do check out the Digital Upstart website, as I’ve plenty advice on bringing out elements of your personality to give your communications a bit of edge.

And do watch that TED spoof if you get the time!