Imagine an Upside Down Pyramid…

And it annoys me.

I think the key factor you need to consider is how much money you might be leaving behind by bailing out too soon!

Leave too much behind on a regular basis and you can seriously choke your results. It has been the downfall of many traders.

It’s only your primal survival instinct trying to take control. It does have your best interests in mind even if it’s a little misguided. It’s sending you an urgent message:

I could change direction as I saw fit. For example I could be long all morning and then flip to a short position if I thought I detected a change in trend, but I could never be completely out of the position.

And here’s how he did it…

Imagine an upside-down pyramid. In fact, here’s a diagram: 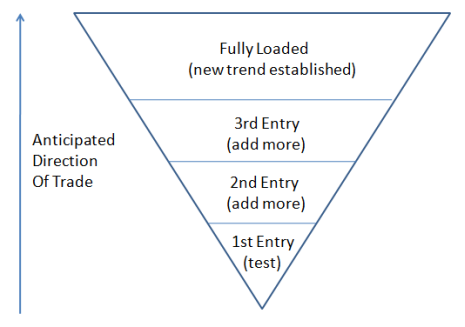 So what Livermore did was to identify a potential turning point in the market and make his first entry (a small test trade) when the market explored that price area.

The market carries on upwards, more contracts added at the 3rd entry…

TIP: This Pryamiding technique can be a total game-changer for traders struggling to get beyond the ‘breaking-even’ stage in their personal trading campaigns. Why not give it a trial run and see what you think?