How to profit when your stop-loss comes under fire 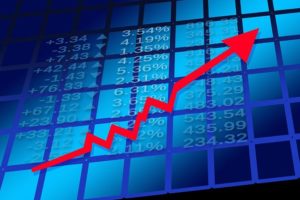 I’ve been working with a new coaching student this week.

We’re just getting into the swing of things – he sends me details of the trades that he made following the methodology I share in the Forex Breakthrough Academy and I give him my feedback.

And credit where credit’s due, my student is doing a great job with his trading journal. He’s making notes of all the essential data points – his entry price, his target price, his initial stop loss location and how he might adjust his stop as the trade develops – but he’s also looking deeper into the process too.

He’s already been spotting areas where things can be tightened up and improved (and it only takes two or three small tweaks for a trader to see a massive improvement on their results).

There was a situation on Friday, for example, where he’d overlooked a scheduled economic report. He’d already jumped into an otherwise valid opportunity but the market moved against him as it reacted to the report and he took a bit of a poke in the eye as a result.

But rather than get frustrated and look for someone or something to blame, he took in all in his stride. He knew it was a valuable lesson. And like I told him this morning, these are usually the lessons that stick with you for the rest of your trading career. The ones you needed to learn most!

It’s one thing to read about avoiding trading around economic announcements, or even to be told not to trade around them, but it’s quite another thing to be on the end of a losing trade as a direct result. Sometimes you just need to go through the direct personal experience in order to take it fully on board.

(And better to go through it now, on a small scale, than ‘get away’ with bad habits only for them to bite you in a much bigger way after you’ve graduated to trading at higher stakes!)

But sometimes, you can do everything ‘right’ and still be on the end of a losing trade. In cases like these there are no lessons to learn.

Well, no lessons in terms of looking for improvements to your trading technique.

The big lesson there of course is that each valid trade is just an excursion into the world of probabilities. Even trades that look to be ‘dead-certs’ carry no guarantees. If you have the discipline to keep running your strategy even in the face of a disappointing outcome on one of these gold-plated trades then you already have the body of knowledge you need.

There was one particular setup my student traded last week that was a perfect example of this. Everything looked good beforehand. All the pre-trade criteria were in place. But looking back at events later that day it was obvious market players with a bit of heft behind them had a different agenda.

The market did eventually move to the upside as the setup might have suggested. But not before it took a dip first. A certain element of this market had a vested interest in taking out the stop loss orders that had accumulated below some intraday lows. Once they’d done the deed, the temporary selling pressure was removed and the market could float upwards unhindered.

It just goes to show that you never really know what’s going on in the market, who else is involved, and what their intentions are. Especially if they have enough size behind them to push the price around a bit. And if you’ve never heard of ‘stop-running’ before let me show you how it works…

How to make money from stop-running

It’s a common complaint: a trader places his stop-loss in a logical place according to recent price action, only to see his stop triggered. The market then pivots round and heads off back in the ‘right’ direction leaving our trader open-mouthed in amazement.

Yep, it’s the dreaded ‘Stop-Running’… but how can you put the shoe on the other foot and actually make money from it yourself?

Here’s a nice example of a Stop-Running campaign in full flow, and some ideas on how you might take advantage of it yourself in future. 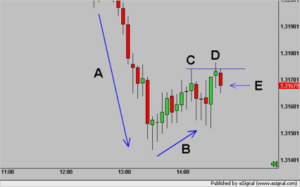 A: The market has broken through support and made a strong move to the downside.

B: Here’s the anticipated pull-back. No real buying strength yet though. It’s just a bit of profit taking before the next wave of selling comes in.

C: This is the ‘Swing High’ that a lot of traders will use to position stop loss orders above in order to protect any short positions they initiated after the pull back. Once the market had pushed down on the red bar immediately after C, seller’s stop losses would be expected to enter or be adjusted to sit a few pips above C.

D: Here it is. The market goes after the liquidity sat waiting in those accumulated stop loss orders above C. They get it up there and trigger the orders. They ran the stops! The lack of real bullish intent is obvious here though – the market turned and put in a new bearish (red) bar.

E: Here’s your opportunity. You’ve been observing all this action going on and you’ve just had your confirmation to trade once we saw the close of that bearish bar – note how not even a single bar closed above the swing high at C.

There’s a high probability of a continuation to the downside now. If you did get short on the close of the bar marked E, you could use the previous low at the end of that down-leg marked A as a technical target – maybe liquidate part of your position just a couple of pips above that low (around 1.3145)?

Or you could simply trail your stop down behind you and let the market take you out. 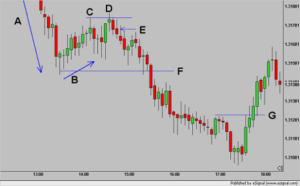 F: There goes that technical target we spotted at 1.3145.

G: And here’s where you would have been stopped-out if you simply trailed your stop above the pullbacks.

We saw a maximum move to the downside of 70-odd pips after the signal to sell at E. Initial risk was around 10 pips. And a 7:1 reward to risk trade is never to be sniffed at!

So just as an experiment, try to imagine that YOU have a ‘stop-running’ agenda. Where would you try and move the market to if you had that size and power, where would the maximum amount of pain be caused to the most traders?

Spot your places and then keep an eye on things if the market does manage to get there. You might just have uncovered a live stop-running operation in action!

US interest rate decision and the Fed announcement is a potential market-mover this week. Be on your guard Wednesday evening and I’ll catch up with you again next week.