On eBay, puppets sell as collectibles and toys, rare and common, large and small, and recently ranging in price from £958.39 for a rare collectible puppet to a paltry 1p for more common types.

These are the highest prices achieved recently on eBay:

At the lower price end are:

Puppets can be made to perform on strings (marionettes), or on a solitary digit (finger puppets), sometimes by hand as where a ventriloquist propels and gives voice to his puppet.

But among puppet collectors, it’s Pelham Puppets that attract the most interest and highest prices on eBay, as these recent sales show:

Characters from popular films and books are very popular with collectors, hence you will find that some Pelham designs are listed, not under the “puppets” section, but in more specific product categories reserved for Disney memorabilia, or for iconic characters like The Pink Panther, The Muppets and Noddy.

Note: Just two words in this title still fetched a high price for the seller. I wonder whether the price might have been much higher still had the seller provided a more effective description?

A Quick Introduction to Pelham Puppets

Robert Pelham started making puppets in 1947, shortly after the Second World War. His first designs were made from recycled materials and with help from ex-service men and women suffering wartime disabilities.

All Pelham Puppets were individually created and made and coloured by hand. So although many puppets might be made from one specific design, in reality no two puppets are ever the same. 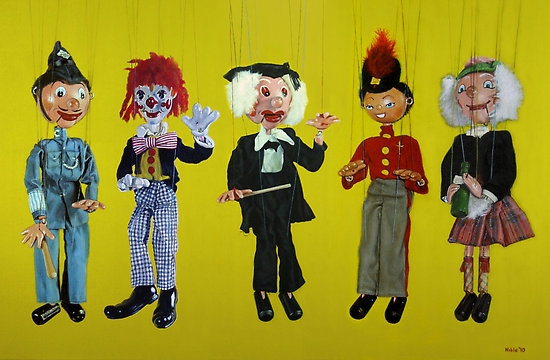 Pelham made toys from 1947 to 1992 under the original trade name of “Wonky Toys”, sometimes called “Wonkey Toys”, reflecting Robert Pelham’s own nickname “The Wonky Donkey Officer” due to the fact he made stuffed donkey-shaped toys for children during the war. The company changed its name to Pelham Puppets in 1948 when manufacturing marionette puppets became its main focus.

Bob Pelham was a perfectionist and was constantly improving his puppets and making tiny changes to subsequent manufactures of the same basic design. Those changes and the fact the puppets were all made and coloured by hand account for wide variations in today’s value of what appear to be pretty similar puppets, but which closer inspection proves are really quite different.

So many changes to the same basic design mean that to buy and sell with confidence you must understand the various components of a specific design and be able to identify whatever changes were made along the way. You’ll find most of this information in an excellent book by one of the earliest workers for the company, David Leech, who you will read about later.

In 1953, Pelham won the right to manufacture Disney characters, and Pinocchio became one of their most popular characters. Subsequently, they gained rights to manufacture and sell popular television characters like Andy Pandy and Twizzle.

Up to the middle 1950s, Pelham Puppets were sold in brown cardboard boxes, and in yellow boxes from 1956 onwards. Various colours on labels and boxes help determine date and rarity value. For example, some of the earliest and rarest, also most valuable puppets, came in brown boxes with blue labels.

A plain cellophane fronted box was introduced in 1968, with a strengthening bar across the cellophane appearing in 1969. A red and yellow striped box came later, followed by another coloured blue.

Original boxes and operating instructions accompanying their original contents will attract a significantly higher price than a similar puppet without packaging. Also, the better condition the box, the higher the combined price for puppet and box is likely to be, as long as box and puppet began life together. Where you’re not sure puppet and box belong together, it’s wise to age the puppet by some other means such as those mentioned later.

The original company ceased trading in 1993 and was resurrected in 2008 by David Leech, a former employee of the original company, who now produces a line of puppets based on new designs and others resembling past popular characters.

Then and now, well-known named character designs are also more likely to start bidding wars on and off the Internet than generic characters.

Value, as for most collectibles sold on eBay, is determined entirely by what someone is prepared to pay for a Pelham Puppet. A specialist puppet dealer and collector suggests the average price for a Pelham Puppet is a mere £25 to £35, unless it is one of the rarer designs and not a recent design or, worse still, a fake.

Yes, that really is his eBay ID (!!!), so to save you time in locating his two excellent guides via writer ID I have included the relevant URLs:

Note: Most Pelham Puppets have a prefix like SS or LS before their character name, adding another important aspect to ageing and pricing a puppet.

• Generally speaking, early puppets are more desirable and attract higher prices on eBay than much later designs, especially where those early designs remain in good condition and in their original packaging.

• Buy stock at boot sales and flea markets, antiques and collectors’ fairs, and especially in local auction salerooms where few expert dealers might be present on the day and puppets might sell below market value. The best places to purchase are from auctioneers lacking an online presence and consequently attracting few or no specialist dealers from outside a 20 or 30-mile radius.

Stock can also be acquired on eBay, where a seller mis-describes his puppet, for instance, as did the person listing a “Pelham Puppet” for sale while omitting information and keywords that may have widened his market and help his listing respond to more searches on eBay.

When that happens, time spent searching for items mis-described or with essential keywords missing, or with spelling mistakes such as “Pelman” seen today, can return handsome dividends for savvy resellers.

• Search for stock on non-eBay buyer and seller marketplaces, notably Craigslist and Preloved where some good bargains are possible from current owners asking fixed prices for their puppets and missing out on potentially much higher prices at auction.

Today at preloved.co.uk you’ll find several Pelham Puppets available for sale and other ads placed by people looking to buy. Now consider doing one or both of the following:

» Compare prices asked for specific designs of Pelham Puppets on Preloved – or Craigslist or other online marketplace – with prices fetched recently on eBay, UK or overseas, or both. Consider buying items with low asking prices on Preloved and potentially much higher prices on eBay. Compare age and condition of items at both sites, view Preloved and other marketplace offers in person if possible, and make sure the seller is not a dealer with the same item listed on eBay. If the item is also listed on eBay and hasn’t sold yet, it’s unlikely you’ll make money buying the item to resell later.

» Place your own permanent “wanted” ad on Pre-loved and expect to purchase items significantly below their potential resale values on eBay.

• The following factors will help you determine demand and likely resale price for a Pelham Puppet:

» Has the puppet been re-strung? Original string, in good condition, will fetch a premium price over another puppet in similar condition which has had its original string removed and new string put in its place. Most very early Pelham Puppets began life as toys, not just collectibles as is often the case today, and after years of being played with in and out of doors, most puppets became grubby and lost their paint, or their strings and other components began to rot and break. That is why so few early Pelham Puppets are available in very good condition today.

All that play explains why many early Pelham Puppets have been restored, sometimes professionally, sometimes by amateurs, and also the reason why whatever Pelham Puppets you consider buying to resell on eBay must be carefully inspected to determine what parts are original, and which are not.

So, apart from checking whether the string is original or recent, the astute buyer-come-seller should also determine:

» Is the paintwork original or has the puppet been repainted or had new paint applied to areas where paintwork is missing or damaged? A puppet with original paintwork in good condition will invariably be much more valuable than one that’s been repainted partially or in total.

» Are there any cracks or breaks, or missing pieces? Some defects can be corrected and some pieces can be replaced by new parts or original parts from badly damaged original puppets. But making repairs and replacing parts is not always a good idea. That’s because repairs and replacement parts are unacceptable to some collectors who want their puppets in good original condition throughout. Moreover, many collectors would prefer to own a slightly damaged original Pelham Puppet than a perfect puppet with some parts added since leaving the factory. See under “Selling Tips” for more information about originality and authenticity.

• Puppets in their original boxes, with original instructions, tend to be the most desirable and highest priced on eBay and elsewhere.

• Words like “Original” and “Authentic” have different meanings to different people, but to ardent collectors neither word applies to an early Pelham Puppet that has been restored or had parts or paint replaced. One possible exception, for some collectors, is replacement strings on a puppet which many collectors find acceptable. So when selling a Pelham Puppet, if you know the item has been restored in some way, or you can’t tell for certain, you should qualify words like “authentic” or “original” by mentioning whatever restoration you know about and acknowledging whatever you do not know for certain.

• Designs and component parts changed many times over the decades and sometimes unprofessional restorers have replaced very different-looking elements from one Pelham puppet with pieces from another specimen. So you might find hands from a puppet made in the 1960s used on another from much earlier times, and vice versa. Mis-match like this is not acceptable to most collectors and could find you buying what you think is an original puppet only to find it impossible to sell.

So learning about Pelham Puppets of all eras, and their specific components, is the only way to be certain of making money on every Pelham Puppet you find selling below market value at boot sales and flea markets. The following book will help you acquire a good working knowledge on which to build expertise to always buy and sell with confidence:

Pelham Puppets: A Collector’s Guide, published by The Crowood Press Ltd. ISBN-10: 1847970559 and ISBN 13: 978-1847970558. Numbers 10 and 13 reflect changes to the ISBN numbering system in 2007 and either can be used to locate this title through booksellers. The title is available on Amazon UK for between £23 and £25. The author is David Leech, the man who worked closely with Robert Pelham and who reincarnated the Pelham Puppet Company in 2008.

Additional product listing categories might be used to attract a wider buying audience, such as: “Collectables > Disneyana” – for characters featured in Disney films

Pelham Puppets Online – this is a forum-based website where collectors and dealers can learn about Pelham Puppets and share information with fellow members. The forum helps with:

“Alvin’s Vintage Games and Toys” has several pages devoted to Pelham Puppets, including:

The site also gives a useful introduction to abbreviations and prefixes used by people buying and selling Pelham Puppets.