How to Kill Your Inner Troll 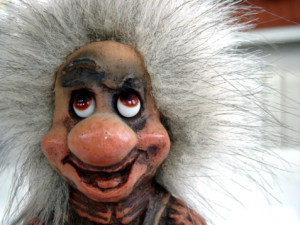 So we all know there are two types of troll.

The first are ugly mythical creatures, renowned for grumpiness and attacking goats on bridges.
The second are those people who deliberately post antagonistic, negative or insulting comments on the internet… whether it’s beneath an article, or in response to a Tweet or other social media post.

You’ll know the type I mean…

They like to dominate forums and comment sections with their relentlessly sniping comments – glorying in their anonymity and saying things you KNOW they’d never dare say in person. What’s more they rarely have anything constructive to say. In most cases you’ll find they don’t have their own blog, product, published work or ideas. Instead they feed off other people’s work, using other people’s public platforms to shout about their woes and gather a crowd of like-minded doom-mongers.

Worst of all, they complain about articles being “a waste of time” or “awful” when quite clearly they are wasting their own time making comments instead of doing something else more useful with their lives.

I’m not saying that there aren’t great comments online – or that you can’t disagree with something (as long as you’re constructive, polite and THINK properly about what you’re going to write instead of vomiting out your immediate reaction)….

…. It’s just that you can spot the trolls a mile off, because they share these characteristics. You might have come across a few!

But there’s a third type….

While the other two Troll types can be annoying (well, unless you’re a Lord of the Rings fan) this is the one that MUST be destroyed at all costs.

So I hope you’ve got a shovel ready.

The troll that must be slapped down for good

There’s the troll which is hunkered down inside your own brain. It’s the nagging voice that throws up a negative whenever you come across something new…

“I couldn’t do that, I don’t have the skills”

“Everything is a scam”

“Don’t trust this person, they’re all the same.”

“Too technical for me.”

“I heard from some bloke that this doesn’t work.”

Worse, this troll seeks out the ONE weak spot in any idea or opportunity and focuses on it to the expense of all the other possibilities. Rather than examining the facts coolly it reacts angrily and irrationally with any old spurious evidence it can muster to make damned sure you don’t even consider it.

Let’s say you read an article about making and selling your own crafts (for instance, jewellery, picture frames, or scrapbooks).

“Oh, yeah but everyone’s doing that, the market is saturated I heard or at least I reckon it must be by now.”

“Someone said they couldn’t get customers.”

“Apparently that Etsy website’s not doing so well anymore.”

“Not this again, when’s someone going to show me something new?”

“Do I have do go online and do this, I hate the internet”

Well, okay, so that’s the troll doing his thing.

But are any of these inner comments constructive? Do any of these help you achieve your goals of doing something fulfilling, making money or running your own business? Are they useful in any way?

How do you know that the troll is RIGHT?

After all, the troll…

You wouldn’t do it.

Neither should you listen to the inner troll.

Instead, you can kill the troll with this thought experiment, which I urge you to try out next time you come across an idea, article, blueprint or offer…

For instance… let’s go back to our example where you’ve just read an article about selling your own home made crafts.

TROLL: “Oh, yeah but everyone’s doing that, the market is saturated I heard or at least I reckon it must be.”
ALTERNATIVE: “People are doing this, so there must be money to be made, I just need to find out more about how.”

TROLL: “Someone said they couldn’t get customers.”
ALTERNATIVE: I wonder how the successful people get customers”.

TROLL: “Apparently that Etsy website’s not doing so well anymore.”
ALTERNATIVE: “I must investigate where the big marketplace is these days.”

TROLL: “I’m not creative at all.”
ALTERNATIVE: “I wonder if there are processes I could learn to do this.”

After all, every piece of advice you come across is springboard. Even if you don’t agree with everything in it, there must be something to learn, to stimulate action. Because without taking action, you’re just a consumer of information when you should be out there producing something yourself.

It’s the same with this very newsletter you’re reading now. I hope it’s given you some inspiration or food for thought, But now it’s time to stop reading, thwack your inner troll over with his head if he’s complaining,  and go get on with your plans.