How to keep the green screens coming

I will quote the famous philosopher Borat here, when I say “I very excite”.I think Borat succinctly described how I feel this week. I don’t know what happened. Something just clicked, and the green screens kept-a-coming. A green screen is what traders strive for.

Check it out. Here’s a list of some horse racing trading I did this week using Fairbot from www.bintenko.com. The screens below are a Fairbot representation of a Betfair market, and I suppose this is the first rule of trading.

Use Bespoke software. It makes your job a heck of a lot easier.

Back to the screenshots… 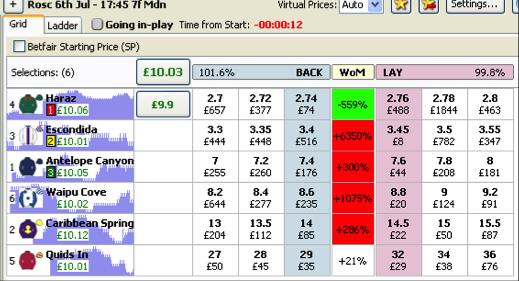 In the above race, whoever wins, I win a tenner. Or below, how about nearly 4 quid? 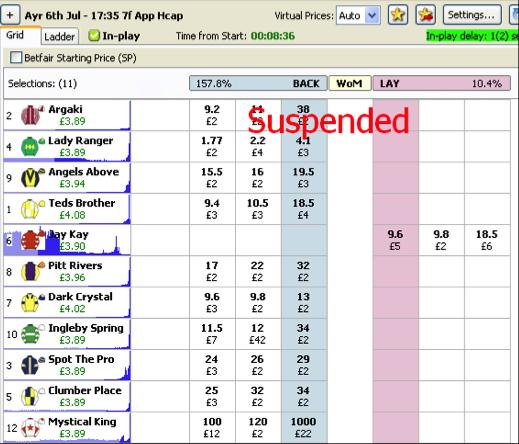 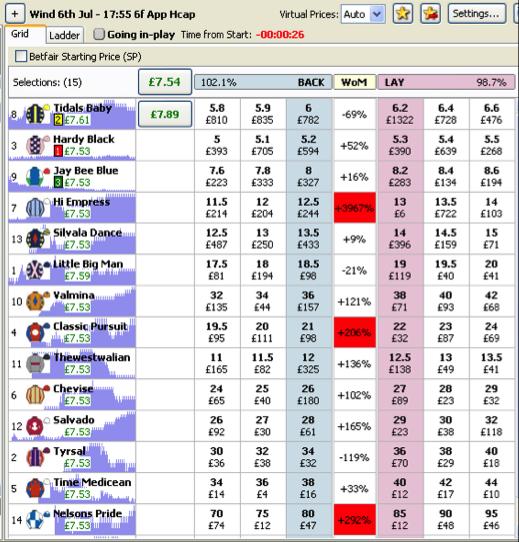 A nice £7.50 in this (yucky) Apprentice Handicap and a fiver guaranteed in this race below… 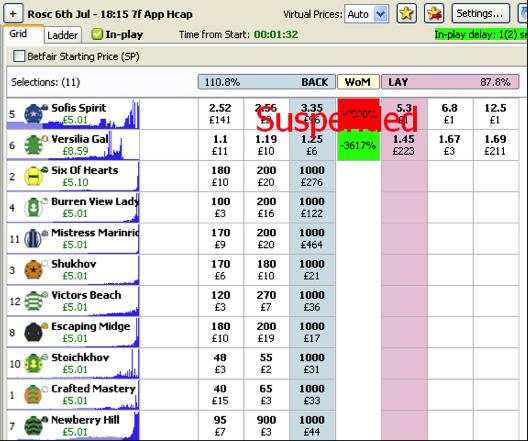 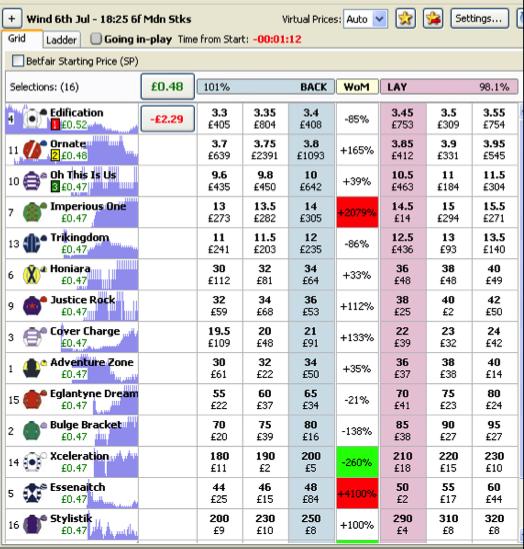 Sometimes I’m happy to nearly break even as shown above with a 47p guaranteed profit, only to return with nearly a fiver guaranteed in the very next race. And note, the short-priced favourite below didn’t even win its race. But hey, who cares, I had everyone covered. 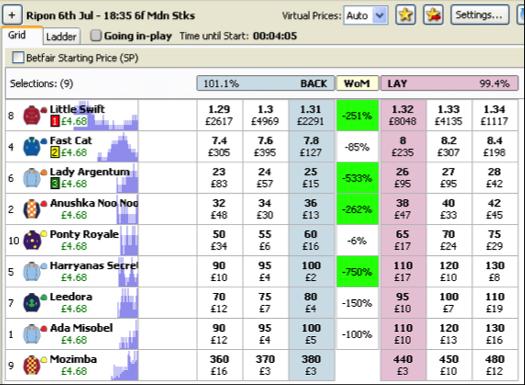 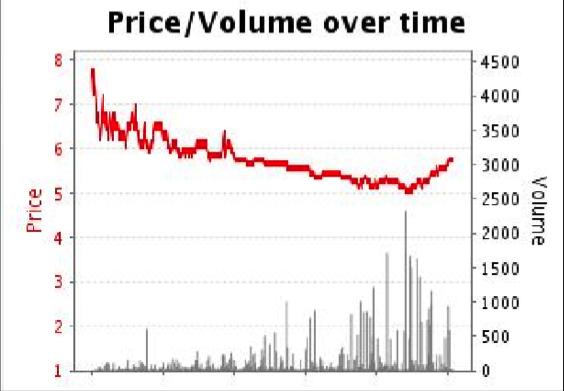 If you guys and gals learn to read these price/volume charts you can ‘anticipate that future price movement’  (remember my definition of trading?)I’m going to be practicing, practicing, practicing with this technique I uncovered and hopefully begin to reveal this strategy in What Really Wins Money’s August newsletter. I need to systematize this trading process. I hope you see above that there is some real potential here for pre-race horse racing trading. It is comforting to know that you have a profit regardless of who wins the race.

As you read this, I will be winging my way back to Guernsey. I have been booked to unveil the new statue in honour of Guernsey Girl Heather Watson, called ‘The Serena Destroyer… nearly’ (not really, I am going back to visit family).

Heather’s superb fight with Serena Williams (glad it wasn’t arm wrestling – she’d have had no chance!), was one example of successful tennis trading.

Take an opinion on a match. Then trade and profit.

My opinion was that Serena was vulnerable if she won the first set. Why? Well Heather had shown in her previous match, a 2-0 straight sets win, that she was a battler. Further, the whole of Eng-er-land, and Guernsey, are behind her. Ergo, we should see a humdinger second set, which indeed is what we saw.

Back Serena at higher odds at 1-1.

I do hope you have managed to capture some of my tweets @whatreallywins for Wimbledon. There have been some great profitable trades. We are looking simply for a swing in the odds in our favour. We are, as I say, ‘anticipating that future price movement’.

They all led 2-0 in sets this Wimbledon only to lose the third set. Why is this? Well, their opponent suddenly wakes up and realizes that if he doesn’t pull his finger out, it’s Sayonara to strawberries and cream and then they’ll have to watch that hideous Clare Balding tennis round-up show as punishment.

The player 2-0 up though thinks ‘it’s in the bag’, and seems to psychologically ‘switch-off’. Both of these factors tend to make third sets highly competitive.

Time and again, we see the opponent win the third set, only for normal service to be resumed and the final result to be 3-1.

Do watch out for this. Lay the player 2-0 up in first to three set matches either in the match odds market, or preferably in the 3-0 set betting market (it is a terribly illiquid betting market at times though).

It’s not all about traditional punting, this betting lark, is it? Sports trading is, I feel, a learned skill. I have helped distill my ideas as far as football is concerned at www.drt.club, and hope to do the same with horse racing and tennis trading in future What Really Wins Money newsletters.

See you next week. I’ll be happily ensconced in Guernsey, home of women’s tennis finest player ever.