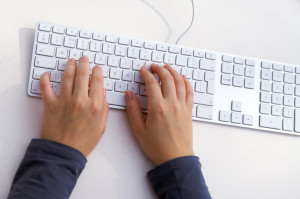 The financial regulators got their knickers in a twist last week…

It was all about the latest market fixing scandal… and this time it’s Forex!

A dozen bank traders have already been suspended. Three of them are former members of the Bank of England’s committee to root-out foul play in the markets (talk about gamekeeper turned poacher)…

And City lawyers are reportedly receiving cries for help from guilt-ridden traders yet to come under the spotlight.

Here’s the story so far:

US, Swiss and UK regulators are all sniffing around allegations that bank traders have been gaming currency prices. They’re examining activity in electronic chat rooms where traders are rumored to be teaming-up to place huge orders at pre-agreed times.

(If they’re careful how they do it, the traders can get orders filled for their clients, but at prices that siphon off the profits for their own benefit.)

Now these chat rooms have some pretty distasteful names. You can have a good guess at the kind of capers going on inside…

“The Bandit’s Club” and “The Cartel” both sound like shadowy places that could teach you a lesson in the dark arts of market manipulation.

“The Dream Team” plays things down a bit but you know the old saying… the quiet ones are the worst!

So what are these chat-room traders supposed to be doing exactly?

Well first of all, it’s not the currency market as a whole that’s claimed to be rigged. At an estimated turnover of $5 trillion a day, it really is too deep and liquid a market to control over a long period of time.

No… what these traders are supposed to be doing is clubbing together to fix the prices for a quick sixty-second period.

Doesn’t sound like much does it? But the implications will make your eyes water.

In trader’s slang it’s called ‘Banging the Close’. And it revolves around a key reference point called the WM/Reuters rate. This is simply the median settlement price following a sixty-second window of trading activity. In this case it’s the one that completes at 4pm London time on the last trading day of the calendar month.

The WM/Reuters rate is used by institutions to give a standard rate at which to settle and exchange contracts. But it also gives traders chance to adjust their positions and try and maneuver the benchmark rate to suit their own ends.

Here’s how a bank trader might ‘Bang the Close’:

At 15:36 he receives an order to sell a Billion Euros for a client in exchange for Swiss Francs.

With an eye on the 4pm close, and the WM/Reuters settlement rate it will produce, Jim has two primary objectives:

1) To sell his own Euros at the highest price possible.

2) To then let the rate move lower so he can buy his client’s Euros from him at the lowest possible rate.

Not bad for a few minute’s work!

To maximise profits, Jim would place his orders in carefully considered installments. This will put as much pressure as possible on the rate as he drives it upwards.

(Because the settlement is based on the average of transactions in the sixty-second period, placing a number of smaller trades rather than one big one will have a greater effect on the settlement rate.)

Jim might also have picked up a couple of ‘teammates’ from other banks in the chat rooms who want rates to change in the same way.

Between them they’d agree who will place what orders, at precisely what time, to achieve their combined goal.

Once he’d sold his Euros at the high point created by their manipulation, Jim would happily watch the price drop back down to true market value. He’d then cover his short position by buying his own client’s Euros from him.

Client gets the crummy prices. Jim’s cup runneth over!

So what to do with this eye-opening information?

But to what benefit?

I prefer to take a more worldly-wise view…

And the nastiest, most bitter tasting schemes are the ones we’ll probably NEVER get to hear about. Trust me, there’s stuff going on in the markets that’ll be kept well and truly buried.

So the question is, will your moral compass allow you to line your own pockets from your knowledge of activities like ‘Banging the Close’?

I’m not talking about doing anything dodgy ourselves, but we might as well look at taking how to take advantage of our insights. The market is the market after all… whether you perceive it to be rigged or not.

So I thought we’d first do a bit of forensic investigation into how ‘Banging the Close’ looks on the chart. You can then think about how you might profit by anticipating this kind of activity.

Let’s have a look at the chart: 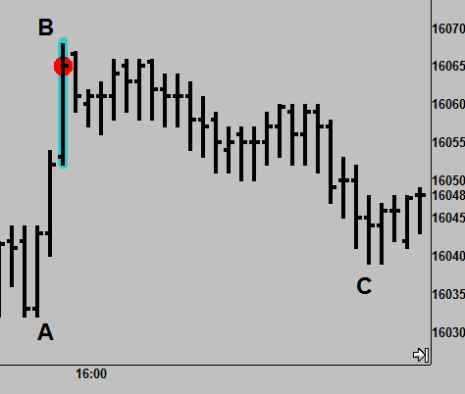 Here we are with GBPUSD on the last trading day of October 2013.

A – B: This is the little volatility pop-up in the three minute run to 4pm. See how much longer the bars are than those before and after the move from A to B. If market manipulation is indeed in progress, it appears they want to sell at a higher price and buy back lower.

The bar highlighted blue is the 60 second period closing at 4pm. The Sell spot is marked red.

A – C: The market then creeps back down to where it was trading at 15:57. The bank guys can now cover their position at a profit with buy orders. Signs of market manipulation?

And you’d have to find a sensible place to work your stop loss order….

But as things stand, here’s what we’re looking for, with an idea of how to trade it:

1. On the last trading day of the month look for a sudden surge in price – either to the upside or downside – in the minutes before 4pm London time.

2. If prices have surged upwards, place a market sell order to get yourself short at 4pm. You’re looking for the market to sell off and retreat back to pre-surge levels.

If prices have surged downwards, place a market buy order to get long at 4pm. You’re anticipating a creeping move back higher to pre-surge levels.

3. Exit your trade as the market returns to fair value levels i.e. the price band it was trading at before the manipulated surge took place.

According to Bloomberg data, the ‘Bang the Close’ chart pattern occurred on frequently traded pairs like EURUSD close to 50% of the time over a 2 year period…

But even if this little ruse gets shut down, can you imagine how many other similar schemes are being played out undetected?

Spot a regular, unusual, blip on the charts and you may well have tapped into your own little gold-mine.

Just don’t go shouting too loudly about it…

(You can always email to let ME what you’ve found of course!)

I hope you enjoyed this week’s issue. Have you spotted any other signs of unusual activity in the markets? Just hit reply to this email and let me know your thoughts.