How to earn £20,000 per month talking about yourself

I’m now back from my holiday to Tenerife, where I had a fantastic, energetic (a necessity with three young children) and Cava-filled time.

For those who sent messages of support, thinking of me with my three little ones on an aeroplane for 4.5 hours each way, thank you so much.

It wasn’t as I expected… in fact it was far worse!

Finally over the trauma of our return journey – several hours of delays and being treated less like customers and more like something you’d scrape of the bottom of your shoe by the world’s WORST airline – I am back to business.

My current passion in online marketing is most definitely ‘vlogging’. And since I got back I’ve been planning out my vlogs endlessly.

It’s something I’ve resisted experimenting with for far, FAR too long. In fact I really wish I’d started a vlog years ago. It’s such a hassle-free, fun and exciting way to create content and get traffic.

Just recently, many vloggers have come to the attention of the wider public and its popularity is set to EXPLODE. I urge you guys to give it a go now too.

Vlogging is basically using video instead of, or as an accompaniment to, text on your blog.

So all vlogs are blogs, but not all blogs are vlogs. The word ‘vlog’ sounds like something out of a science-fiction novel, but is simply a shortening of the phrase ‘video blog’.

The appeal is simple: videos get shared and go viral much more frequently than text these days.

A video blog is as simple to set up as a traditional text-based blog is. Most WordPress themes are very simple to add videos to, and there are even specific vlogging themes already created that really show off video content nicely.

What to Vlog about?

This is simple: yourself; your passions; your interests… You don’t even necessarily need a niche. Some of the most popular vloggers don’t have one – other than their lives.

A word of caution though… one thing I have noticed in my own effort is that my niche (fashion and beauty for busy mums) isn’t one that Google favour video content in.

To illustrate this, look at what happens if you Google this general ‘beauty’ themed phrase:

Of over a million results, Google are heavily pushing video as the optimal content, giving video tutorials the top two coveted spots.

In contrast, one of my planned videos, on what to pack in your hospital bag when having a baby, shows no video on the first few pages: 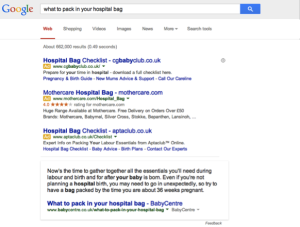 This is an odd one. But goes to show that Google’s algorithms work on the basis of what the best format is to consume information, based on the type and genre of a phrase.

That’s not to say, though, that a video on such a topic is not worth creating. Indeed, on YouTube I found lots of successful videos on the topic (though not as niche as mine, as I’m focusing on specifics for the mum). 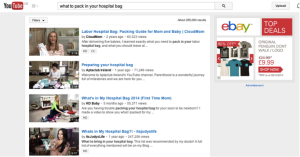 But it is worth thinking about which search terms relate to your videos and then check out if video is a good medium for the information you have to share.

It’s also worth noting that the youngest generation/s use YouTube for pretty much EVERYTHING – favouring finding out all types of information in video form, whereas different demographics may not use the site in the same way.

I’m generalising, but you get the idea – just be sure your audience will be tempted to YouTube to find answers.

Anything practical in topic is always a good bet. If you want to do a vlog charting the journey of you doing up your house, or training your new puppy, or anything that someone else may want to follow the specifics of, then you’re on to a good thing.

So, if you want to start your own vlog, what do you need to get going?

In terms of equipment, start out with what you’ve already got. I started with a pretty basic webcam that’s built in to my laptop, and I simply use iMovie to edit – so whatever software you have on your computer is great for a starting point.

No need to splurge initially. Although, be warned: you will quickly want to when you catch the bug!

Plan your videos! I am scripting most of my videos now. I don’t often do much editing to a script; I just write down what I want to say so when I actually get in front of a camera I can get it done, without too much rambling. I am a rambler, in both text and the spoken word, so I find a script very helpful.

Having said that, I’ve done videos where I only have an outline, or nothing but a vague idea of what I want to say – one of which is my highest viewed. It’s mostly just best to do what works best for you.

In terms of what you share, that’s also largely up to you. Some people worry a lot about privacy. I do too. I don’t talk about personal stuff. But I do try to be honest and to portray myself.

I think reasonable boundaries are always a good idea, but I think the most important factor in how much you want to share is your own comfort level.

The biggest part of vlogging is just actually doing it. So give it a go.

If you want to check out some of the top vloggers right now, head over to:

Marcus Butler’s channel – Marcus is a ‘lifestyle’ vlogger, but, essentially, just makes silly videos with his friends to earns a reported £20,000 per month income.

And, probably now the most famous in the UK of them all, Zoella – a twenty-something beauty and fashion vlogger who is reported to have earned a LOT of money as a result of her vlogs – has recently secured a book deal with Penguin to write teenage fiction.

I’m currently working on an in-depth guide to getting started with vlogging, which will be going in to the next issue of the Internet Income Detective newsletter so please do keep and eye out for that.

As always, let me know if you have any questions.