Benfica used to be my favourite football team, only because I backed them at odds of 110 earlier this season and they won!

Well yesterday, using my DRT philosophy I backed a Singaporean team called Tampines Rovers at odds of 140, and they won!

Yes, Tampines Rovers. I have been singing ‘They are, by far, the greatest team the world has ever seen’. (They’re probably not even the best team in Tampines, but hey, my Betfair account doesn’t mind!)

Check it out! This is a screenshot of Fairbot from www.binteko.com (it’s just a way of placing a bet at www.betfair.com)…

Here’s how this example worked… I noticed this match at www.betfair.com and that it went ‘in-play’, meaning that I could bet as the match unfolded.

I kept an eye on this match and noticed the away side Harimau actually were leading 0-2.

A bit of basic research at www.soccerway.com shows that Harimou don’t do a lot of winning in the Singapore league. In their recent matches they have been conceding late goals and conceding 3+ goals. 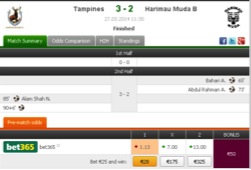 This is what DRT is all about. Note a short-priced favourite. Delay. Delay some more. Wait for a massive surprise, then pounce! If the team was so short pre-match, it must have been for a reason?

I do stuff like this week in and week out. The key watchwords for DRT: ‘low risk and high reward’. So why not join me and my happy live chatters some time? I’ll be looking for these bets for you where you risk low and win big!

Stick a pin in it!

That’s what my Gran used to do. Yes the Grand National will be with us very soon. Now, I don’t normally advocate getting stuck into a 40-runner 4 mile+ handicap Chase over massive fences every day of the week.

I prefer to each way back in 8/9-runner races myself (as What Really Wins Money readers know at www.whatreallywinsmoney.co.uk).

There are, though, key trends which are apparent in the last ten winners of the Grand National which might just make your job easier in uncovering the winner!

Get the deer stalker on!

If Sherlock Holmes was looking for the winner, he’d look at things logically. This is a handicap Chase, so trainers who want their horses to have the best possible chances of winning the race will try and ensure their weight is kept down…

And how do they do that? By running said horses over HURDLES rather than Chase fences!

Look therefore for horses who have been campaigned over hurdles this season. It may point to a trainer trying to protect his horse’s handicap mark.

Burton Port is a horse who has exclusively been raced over hurdles this season by Jonjo O’Neill.

Thirteen of the last 18 winners were aged between 9/10 years.

In the last 88 years, no horse older than 12 years of age has won the Grand National.

The most recent winners all ran with a handicap rating of between 136 and 157. Focus only on horses between these official ratings.

Since the war only six Grand Nationals have been won by horses carrying more than 11st 5 lbs – and two of those were by the incredible Red Rum! 11 stone 7lbs and under looks to be the optimum weight.

Weight, remember, is key for handicaps, much more so for a long distance staying handicap Chase.

The stamina to last the course

Concentrate on horses who are proven over 3+ miles as winners. (Vladimir Putin’s favourite horse) Gay Trip in 1970 was the last winner who hadn’t won over 3 miles before.

The winners of the Grand National have been proven winners in Class races. Look for horses who have previously won races worth £17,000 or more.

All of the last ten winners had run at least ten times over fences.

Although a few horses have raced at Cheltenham and then gone on to win the National, generally we are looking for horses who are peaking in April, not mid March! So look negatively on any Cheltenham festival runners this year who are running in the Grand National.

I’ll be on Twitter @whatreallywins for the duration of the Aintree Grand National meeting, beginning 3 April 2014 (a Thursday and culminating with Saturday’s Grand National card, where we’ll take the stats through the card and try to nail some great each way priced horses).

Will these teams falter in their league matches this weekend?

I’m off now to buy a new Tampines Rovers football top. I am now a fan!

Have a great weekend,