How ALL markets are manipulated and why traders often forget their own orders are to blame! 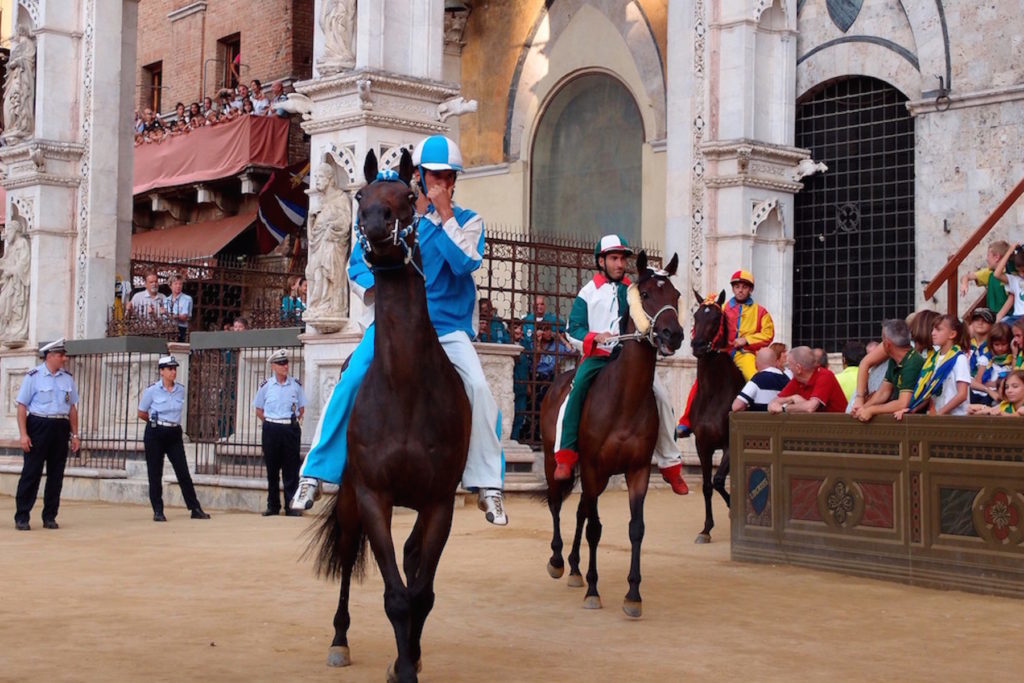 It was recorded in Italian with English subtitles but it had me hooked from start to finish (and since I speak barely a word of Italian beyond ‘ciao’ this was quite something).

Twice a year, in Siena, they hold this extreme race called The Palio, they reckon it’s been running since the mid 1600s.

It goes right through the middle of the medieval town while everything else grinds to a halt for days at a time. The entire population of Siena turns out to watch and cheer on the horse representing their local neighbourhood.

And when I say cheer them on, I mean fanatically cheer them on… people overcome with emotion in floods of tears, marching crowds chanting bawdy songs, bouncing banks of spectators swinging coloured scarves around their heads. You can picture the scene.

I mean, the Italians are good at passion anyway, but this was impressive. Especially when you consider they are racing for custody of a painted banner, there’s no big trophy, cash prize or anything.

But really it’s all about honour and local pride. Each of the 17 Contrada – the local neighbourhoods – has their own allegiances and their own sworn enemies, and there’s no way they want a poor performance from their horse losing them face.

So a neighbourhood captain is elected. It’s his job to negotiate with the jockeys. He’ll try to secure the services of the top one and this isn’t always down to pure riding ability…

A rider’s rank and worth is much more likely to be gauged by how ‘connected’ he is throughout the racing community, because favours given and owed, financial and otherwise are an integral part of this sport.

NOTE: This is important. Hold this thought. I’ll be telling you what I think about competitive ‘manipulations’ like this in just a moment. It’s crucial when it comes to the markets and trading.

Yes, all the gossip and speculation leading up to the race isn’t likely to be about which horse is on form, it’s much more likely to be about who has paid-off who, and by how much. And the TV pundits covering the race will actually analyse all these shenanigans. Much like Gary Lineker and Alan Shearer might cover ‘goal of the month’ on Match of the Day!

Only in Italy, eh?

And because the jockeys are considered ‘guns for hire’ there’s always an element of mistrust too. It can get pretty messy at times: did he lose on purpose to let your neighbourhood’s enemy win, lining his own pockets in the process? There have been some pretty brutal crowd assaults on suspect riders that got stuck at the back of the field, or fell, so at the end of the race the non-victorious jockeys get whisked away to secure locations until passions subside.

One of them even described hiding with two big kitchen knives in his hands until the police came to smuggle him out of town while a baying mob was hunting him down.

If it were me riding I’d be hanging onto those reins with a vice-like grip!
Now, the film focused on two riders…

First we have Gigi Bruschelli, man of the moment. Winner of 13 races he’s seen as the current ‘Godfather’ of the Palio.

Portrayed as having built an unassailable personal empire within the race he has all the contacts at his fingertips. His stables train many of the horses so he knows which ones are in form and which are carrying knocks and bruises, and he even brings new jockeys into the sport and mentors them to success.

What better investment in your own ability to influence and persuade – a field of competing riders that owe it all to you!

The other jockey was the young upstart Atzeni Giovanni. He’s a Bruschelli mentee trying to escape the shadow of his patron. Does he have the grit and gall to make the break and go for a win in his own right, or will his debt of gratitude to Gigi weigh too heavy?

(Giovanni ends up winning both races in the year of the documentary by the way.)
So, far more than just a horse race, the Palio is like a game of high stakes poker (it was hinted that one neighbourhood contributed a one-race war chest of 2 million euro to help smooth the path to victory for their jockey).

You can even see the jockeys siding up to each other at the starting rope to cut blatant last minute deals.

And I absolutely love the unashamed transparency of it all. There are no pretences of purity. When competition is underway and the stakes are high people tend to use whatever tools they have at hand to help their cause. It’s just human nature.

It’s why I always smile when I hear traders grumbling about market manipulation.

Now traders are part of the game so they should know better. They are doing business in the markets, and every time they buy or sell, their little piece of action shades the movement of the market too. If you’re actively trading you actually cannot fail to ‘manipulate’ the market to some degree!

That’s what a market is after all: a measured reflection of the combined activity of all the participants at that moment in time.

As long as you were doing nothing illegal – no insider trading or anything – there’s absolutely nothing wrong with buying in a big way to drive the price higher, or engaging in selling activity that might make the price move lower.

The markets don’t exist in a vacuum. Every action taken contributes to affecting the price.

It’s one of things often overlooked by traders who are back-testing strategies – they forget their own trades can actually begin to have an effect on the behaviour of the market price, especially once the size of their orders has grown to a considerable level.

But, like Atzeni Giovanni, and his two wins against bigger and stronger competition, there’s always room for the nimble lone-wolf to navigate his way around the markets in order to get ahead.

So don’t let talk of manipulation put you off trading and don’t get suckered into playing the ‘manipulated!’ blame game for your losing trades.

Remember that the markets are manipulated by definition – it’s the very thing that makes the price go up and down. They cannot exist held perfectly in balance.
And where would we be without movement in price? There’d be nothing left to actually trade!

A bit thin on the ground for reports this week but that doesn’t mean the markets can’t move (hard and fast) for no apparent reason… like we saw very early last Friday!

Trade safe. And until next time…