From the Betting Doctor – How to profit from simple market observation…

Funny how you could have two identical matches, with (more or less) the same current in-play stats to that point in the game, and where both are drawing, yet the prices can differ wildly for backing and laying the draw.

I will explain what I mean further below…

Yet one is priced around 1.61 to back, and the other you can back at 2.2 – with only a four-minute difference between them!

Now I can accept a slight variance, but for me that’s too great, especially when both are closely matched on in-play stats.

These are the in-play stats for Drogheda match that’s currently 2-2. You can see a total of 12 shots on target for (six for each side).

This, for me, is one of the key important stats. The current price to back the draw is 1.61.

….And here are the Shots On Target stats for the Shelbourne match, showing a total of nine combined (which is still a decent figure at this point in the match), and with the price to back a draw at 2.20. 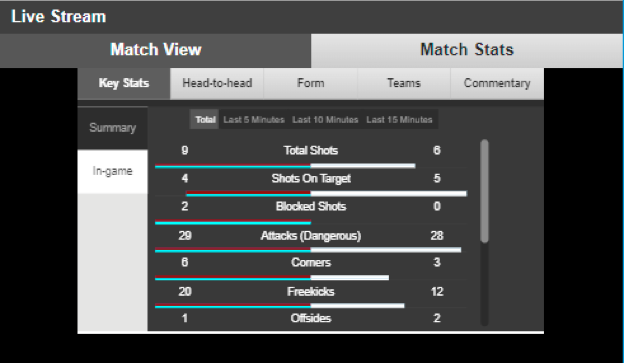 Again, not a major difference with the Shots On Target figures to warrant such a difference in draw prices.

If anything, I would favour laying the draw in the Drogheda match at 1.67, as with 12 shots on target I would expect a goal.

Plus 2-2s are a rarer finishing scoreline than 1-1s, so that’s another reason to lay the 2-2, along with the fact that it offers less liability.

Yes, agreed, the price of the Drogheda match should be shorter for the draw, being four minutes longer into the match, but not for me, that’s a tad too low – thus the reason why I think it would be ripe for laying.

I did check whether there were any red cards in either match that would make the odds differ so much, but apparently there wasn’t.

It’s revealing what you can spot by simple market observation. You would expect more or less the same prices to be offered on matches that are closely matched on stats and time elapsed, but (as in the above case) this is not so.

There are many more similar examples daily of these price variances, where you can pick up some nice profits by using comparable price and stats information at more or less the same point in a match.

Remember, the markets are transparent, and the stats are there to be used – so start using them today and you will soon see how your profits can move forward.

The post From the Betting Doctor – How to profit from simple market observation… appeared first on What Really Wins Money.