From Cambodia to the Australian Open

Not much has been happening from yours truly from a betting perspective this week. I have been accompanying my 79 year old Dad whose dream it has been to visit Angkhor Wat in Cambodia ( I think he was only interested in the visit in the hope of meeting Angelina Jolie.) It has been a superb trip, tinged with a sobering visit to the Killing Fields outside of Phnon Penh. Our return was interesting. At the airport, they were giving out free beer. I was so taken a-back I add to wonder if this was Heaven?

I’ll be back in the groove this week as he prepares to visit my sisters in Australia and can do some catching up. I am guessing, this early, that all eyes are on March’s Cheltenham Festival. Here at WRWM Towers, the February edition of What Really Wins Money newsletter is traditionally given over to all things Cheltenham Festival.

The main International sports event beginning soon is the Australian Open. Were it not for the time differences, this would be a great tournament for you sports traders ( backers and layers.). You could, if you’re lucky , find a match in which a 1/10 on favourite is available to back at 55/1 in play, and still goes on to win! This graph below is of a match where Caroline Wozniacki ( World Number 2 at the time) was a point away from going down ( after being 5-1 down ) and miraculously fought back to victory). So…watch for seeded players getting in real difficulty, back them at high odds in play, and hope they ‘ do a Wozza’

If you are able to follow the men’s Grand Slam tennis, remember this. These are uniquely best of 5 set matches. There is a real phenomenon in this matches where a player may go 2-0 up in sets, only to drop the next next . Their opponent realises he is in the doo-doo if he does not win the next set, and we see a sudden 2-0 to 2-1 happen so often. The trader will be licking his/her lips.

If a seeded male player is 2-0 down, remember this also. It ain’t over until it’s 3-0! Seeded players still have hope and do come back from the brink! How many 2-0 sets to 2-1 can you spot from this screen shot at the French Open ( another Grand Slam)? 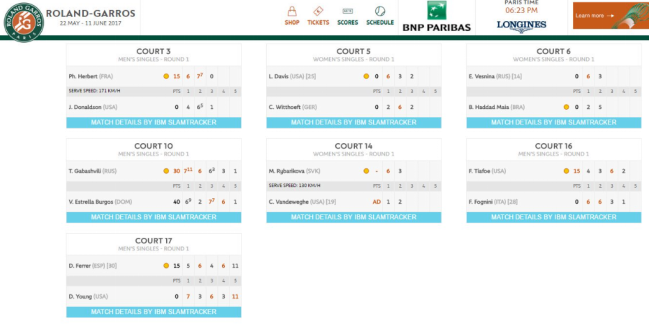 Good luck if you can play the Australian Open.  See you next week !

The post From Cambodia to the Australian Open appeared first on What Really Wins Money.