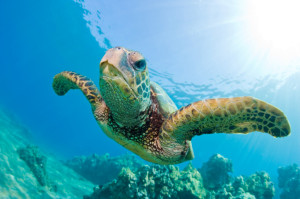 They set out to prove once and for all whether nature or nurture dictates how successful a person can be.

Needless to say, the whole thing blows up in their face.

But there are genuine trading reasons to watch it, honest!

And the inspiration behind the screenplay can give us some interesting material to work with.

The first is when the Texan Hunt brothers tried to corner the Silver market in 1980. They soon came to a sticky end though, just like the Duke brothers in the film…

The Hunts swiftly went from holding 77% of the entire world’s silver supply, to being over a Billion dollars in debt.

The US government basically changed the laws to force them out of their silver position.

(And rumour has it many of the regulators themselves had been caught out holding short silver positions. Isn’t it handy when you can change the rules to smooth away those pesky losses?)

The other trading story that certainly runs true with the theme of the film is Richard Dennis’s Turtle Traders experiment.

Just in case you’ve not heard of it before, here it is in a nutshell:

Dennis believed he could teach people to become great traders.

Eckhardt thought good genetics and upbringing were critical components that would be the downfall of Dennis’s teachings.

Dennis coined the immortal phrase “We’re going to grow traders just like they grow Turtles in Singapore” and the rest is history.

And Dennis certainly proved his point…

Over the next four years, the ‘Turtle Traders’ as a group went on to earn an average compound rate of return of 80%. And that equated to millions of dollars net, straight on the bottom line.

But something Dennis said in an interview has always stuck with me. When asked if he was concerned about giving away trade secrets, here’s what he said:

“If what you’re doing is right, it will work even if people have a general idea about it. I always say that you could publish trading rules in the newspaper and no one would follow them. The key is consistency and discipline.”

Almost like the old adage of hiding treasure in plain sight.

He goes on to say…

“Almost anybody can make up a list of rules that are 80% as good as what we taught our people…stick to those rules, even when things are going bad”

So we’re all aware how important self-discipline is and how it can create the consistency traders crave. Every trading book you’ve ever read drums it into you.

But what does a real groundbreaking system look like on the inside?

In order to take confidence in the strategy through thick and thin, exactly what did Dennis teach his Turtles?

Well, we’re fortunate that the turtles had a little disagreement amongst themselves a few years ago.

There was a spat over the public disclosure of their rules.

In an effort to provide clarity and to protect the integrity of Dennis’s teachings, Curtis Faith – one of the Turtle Traders – released his ‘definitive’ Turtle Trading rules.

The good news is the rules are available as a free of charge PDF download and I’ll give you the link to that in a moment.

But first, I wanted to suggest how to use the Turtle’s rules.

Rather than treat it purely as a freebie system – although it’s certainly worth your tests and investigations – treat it as the holistic template for a good trading strategy.

So even if you don’t end up trading the Turtle System itself, hang onto this document. You can run any other strategy you’re considering through the same framework template to make sure you’ve got all the essential points covered.

You can download The Original Turtle Trading Rules Here

Bitcoin Bulletin: Where to next?

If you recall, last week we looked at the current situation with Bitcoin. It was just after Bitcoin prices had tested the price point of an ounce of Gold. A huge psychological resistance level…

The Sheep Marketplace scandal had just hit the news wires, and we were comparing the shape of the Bitcoin chart to the classic ‘Asset Bubble’. Speculating on whether it was about to crash or if it was able to make another run to the upside.

I’m still fascinated by the Bitcoin story. I thought we’d have a quick look at developments from the last seven days.

Well, the big news is that China has banned its banks from handling Bitcoin transactions. This week’s 50% dive in price was attributed to that first step toward regulation.

Here it is on the chart: 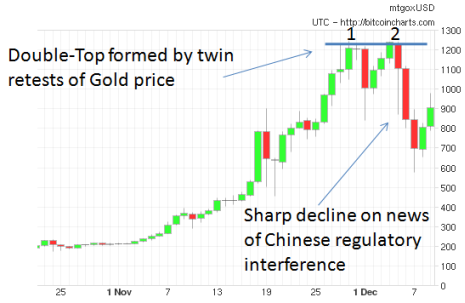 The Sheep Marketplace theft we discussed last week also took a new twist. Turns out the transactions the techie sleuths were tracking across the Internet were not the actions of the cornered thief trying to hide his ill-gotten gains after all – they were simply the legitimate internal workings of a Bitcoin exchange.

Did the ‘Bitcoin Burglar’ do the obvious thing after all and swap his hot Bitcoins for hard cash at the earliest opportunity?

And in other Bitcoin news…

Mel B from the Spice Girls became the first mainstream musician to accept Bitcoin as payment for her work – she’s selling her latest single on her website, priced in Bitcoin.

And Swiss lawmakers are considering new legislation that’ll pigeonhole Bitcoin as a foreign currency. This will give clarity on the legal status of Bitcoin transactions. A move toward the notorious Swiss banking system embracing it?

I’ve never known anything like Bitcoin for creating a difference of opinion. I’ve been involved in some passionate debates over the last week and I’m positive we’ve not seen the last jaw-dropper from the world of Bitcoin yet.

The big question is, will we all be trading Crypto-Currency crosses in a few years time rather than ‘traditional’ Forex pairs we trade today… Bitcoin against Litecoin or whatever devices the wider economy finally settles on?

Technology move so fast these days, who knows?

So where do you see us heading? Drop me a line and let me know your thoughts.

I hope you enjoyed this week’s issue. Check out that Turtle Trader document and let’s see where we stand with the Crypto Currencies next week.