Focus on these major tennis tournaments: they open up a whole world of betting/trading opportunities…

No I haven’t incurred the wrath of my girlfriend by hogging the TV to watch Wimbledon and the World Cup – I am of course referring to the tennis.

You should focus on these major tennis tournaments: they open up a whole world of betting/trading opportunities…

Why? Firstly, in the men’s matches, it is the best of five sets, so you could be a Rafa Nadal for example: a set down and a 4-2 down in the second set, and, well, end up winning the match (against Lukas Rosol, yesterday).

Do watch out for this. It happens a lot more often than you think. Check out this screenshot, just from yesterday’s men’s matches at Wimbledon.

Let’s go from the top to the bottom shall we?

22nd seed Philipp Kohlschreiber won the first set, but lost the next two sets. What do you do? As this is the best of five sets, you keep faith in this 22nd seed and back him 2-1 sets down, or lay his opponent Simone Bolelli two sets to one up. Kohlschreiber won the next set. And that is all you need to profit as a trader (note he lost the match).

24th seed Gael Monfils lost the first two sets against Jiri Vesely. But what do we do? We remember that this is the best of five sets and have faith in that 24th seed. He then goes on to win the next two sets. If you had backed Gael Monfils two sets down at better odds than you’d have got pre-match, or layed Vesely two sets up, you’d have made a great trading profit.

Note the emphasis, because as a straight bet, you would have lost as Monfils would have lost the match, but from two sets to love down, equalised the match at two sets all. This produced a great swing in the odds.

14th seed Tsonga was two sets to one down to Sam Querrey. So what do you do? He must be 14th seed for a reason? Keep faith and lay Querrey at short odds or back Tsonga at bigger odds. He ended up winning.

How can we profit from the fact that men’s tennis is a best of five sets in the major tournaments?

There is a real urgency in ladies’ tennis as it is a match which is the first to two sets. If a short-priced favourite (Azarenka above at odds of 1.17) loses the first set, she (and other short priced favourites) will generally win the second set.

You can profit by laying Jovanovski a set up, or back Azarenka a set down, and trade out when she wins the second set (for more information on trading and Betfair, go to http://learning.betfair.com/en/)

How to profit from big mug-punter accumulators!

Take a look at these beauties… 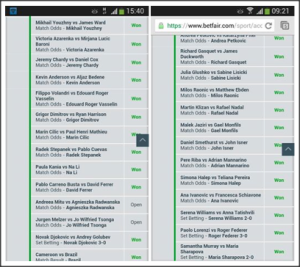 Only attempt these kinds of accumulators in first and second-round major tennis tournaments, as the big boys and girls will be playing much lower-ranked players.

The first accumulator paid out about 4/1 and the second accumulator about 5/1. The odds generally were painfully low and yes, I will be called a mug punter, but at no real stage was I in trouble in either accumulator.

Notice too that with the ridiculously short-priced players (Novak Djokovic, Serena Williams, Sharapova, Federer), I added a set betting win to nil to my accumulator.

The secret to success? Research. And in tennis, research can be a cinch! Simply go to http://www.atpworldtour.com and use the head-to-head facility for the men’s tour and wtatennis.com for the women’s tour.

Enter the two players you are thinking of including in your accumulator. Look at the example below:

What do I want to see? Firstly I want to see a big gap in the rankings. Here we have 11th v 76th. Do note that top 10 players are a class apart generally (ask Heather Watson yesterday playing 7th in the world).

Secondly, to add cream to the strawberries, we want to see comprehensive head-to-heads. Here Ivanovic has comprehensively beaten her opponent on each occasion.

You can go more in-depth by looking at:

http://form.tennis.betfair.com/tennis is another free resource you can use.

I’m off now to eat the shoulder of an Italian defender, washed down with some Pimms and Robinson’s Barley Water.

Oh, and if you want some free World Cup research, check out www.whatreallywinsmoney.co.uk where I’m providing statistical research for free!