Finally, proof that online trolls are a bunch of SADISTIC PSYCHOPATHS! 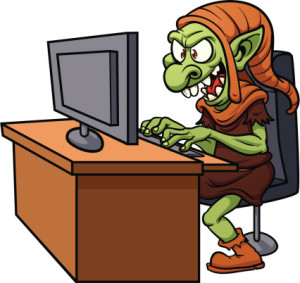 I write this with a mixture of anger and fear…

Let me tell you in advance, this message will be mocked, attacked and ridiculed.

A small minority of ‘extremists’ will denounce me as a coward, a conman or the incarnation of the devil himself.

But what I have to share is so important for the rest of us, that I am prepared to suffer the inevitable attacks.

A few weeks ago I talked about killing your inner trolls – those nagging inner voices that trash your hopes and ideas before they even get a chance to take root.

But what about actual trolls?

Not the inner ones that hide in your brain… but those flesh ‘n’ blood cynics, critics, doubters and bullies who hang out online waiting to pounce on their next victim.

If you’ve ever blogged or used social media, used a forum, or commented beneath an article, you might have come across them.

Maybe you were unfairly hassled for expressing an opinion. Maybe you liked a product and were accused of lying. Maybe you asked an innocent question and were told you were stupid or mislead, or wrong.

Believe me, in my time I’ve seen plenty.

On more than once occasion, gangs of bullies on forums (emboldened by being anonymous) have set on people they’ve disliked for whatever reason.

I’ve known incidences where police have been involved, where perfectly good websites have had to shut down – and fielded calls from people traumatised by their experiences.

Before we go on, I need make a distinction here: I am not saying that all negative comments online are the work of trolls.

Indeed one of the great things about social media and the internet is being able to get feedback – the good and the bad – from your prospects and customers.

Getting constructive criticism is a vital part in the development of any project. It allows you to make improvements and prove that you are listening.

But the trolls I’m talking about aren’t interested in helping you – their very purpose in life is to attack and belittle for the sake of it.

And what about those trolls in your actual life?

If you’re lucky, you don’t have them.

But many people do…

A recent article in The Independent showed how a team of Canadian psychologists had found that people who troll on the Internet exhibit traits of “sadism, psychopathy, and Machiavellianism” in real life.’

So they’re out there in the real world, not just online!

They can come in milder forms too…

That friend, colleague or family member who makes barbed comments about your home business interests…
sneers about your ambitions… tries to make you look stupid in front of other people… automatically has a negative opinion on everything you say… makes out that you’re stupid or misguided, even though they’ve no evidence for this, or tried to do this themselves…

Often they’re doing it for fun – as a form of bullying. Other times it’s borne out of jealously or resentment, because they’re not able to get off their backsides to do anything themselves. Often it’s an expression of frustration with their own life.

Whatever the reason, you shouldn’t have to put up with it.

So what can you do?

The truth is, your reaction to deliberate provocation should be to avoid any response at all.

Your annoyance is oxygen to a troll.

They breathe it to live.

Without it they starve of oxygen and go look for someone else to feed their habit.

Quite simply, if you get trolled online, don’t rise to it.
* If you think they’ve touched on a real problem (for instance they’ve pointed out that you might be involved with a scam) then go off and do some more research yourself.
* If you feel angry and hurt, don’t lash out. Log off or shut down your computer and go for a walk. Responding will not do anything to make you feel better – most likely it will make things worse.
* If the troll continuously hassles you for a response and you feel you must do so, write something neutral like “Thanks for your comments, I’ll bear them in mind”.
* If it’s happening on Facebook or Twitter you can block, ‘unfriend’ or report them.
* Finally, if you’re being trolled by more than one person on a forum or comment section – and reporting the behaviour does you no good – consider whether it’s of any value to continue being on there.
If you get trolled offline – by someone in the pub, at work, or a family event for instance – then it’s harder, of course. If they’re offering constructive criticism, or sharing a genuine experience they’ve had, that’s fine – you should welcome it.

But if – without evidence – they say something just to irritate you or make you feel bad, along the lines of…

“Only an idiot would fall for that.”

“You think you’re better than everyone else”

“What makes you special? Just get on with your life and stop dreaming.”

“It’s a pipe dream, get over yourself”.

…Then the key is to remain calm and say something like:

“I respect your opinion, of course, I’ll bear that in mind.”

“I’d prefer not to talk about this right now.”

Then immediately change the subject or walk away.
If any of what they’ve said has put doubts in your mind, then go back to your research.

Or go back to the business plan you’re involved in, and get to work on it.

The way to prove to yourself that something works is to take action. And the only way to prove someone wrong is to SHOW them the results.

Let’s kick out those trolls!