Case Study: The Great Easter Egg Fight of 2017 (And How it Made One Company a Lot of Money)

Now that the dust has settled, I think (hope) I can tell this story without getting into trouble.

And please, before I wade into this tale like a crazed angler into a pond full of hungry fish…

By no means do I wish to get into a religious discussion.

So please don’t be offended.

This isn’t really about religion…

It’s about the potential for even the smallest business to make massive waves online and use the power of media to promote themselves and make money.

Even if this story annoys you, it should also inspire you.

With any luck, you can try something like this on a smaller scale to punch far above your own weight, and get yourself some new customers.

Okay, so I’ll start at the beginning.

The Great Easter Egg Fight of 2017

There was huge controversy on the run up to Easter when the National Trust, allegedly, removed the word EASTER from their annual ‘egg hunt’ marketing campaign.

This is where they run egg hunts at their venues over the Bank Holiday weekend, in collaboration with Cadbury.

The newspapers were all over the story…

And the social networks were buzzing without outrage.

The comments were along the lines of ‘How dare you take Easter away from the eggs?’ and ‘You’re removing Christianity from Easter!’

Even the Prime Minister Theresa May took time while in serious talks in the Middle East to voice her objection: 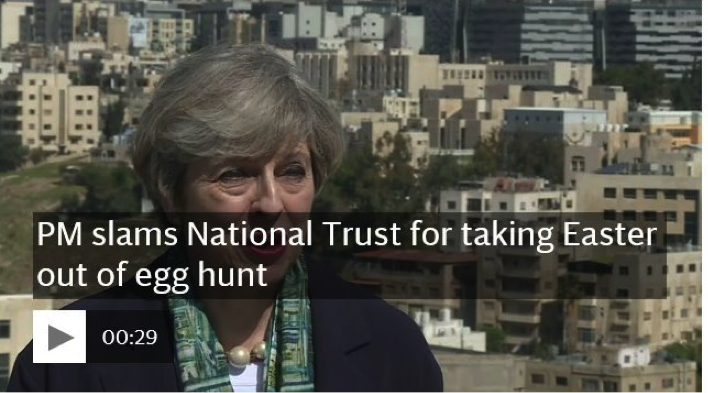 Now, if you were also angry with the National Trust and agree with Mrs May that’s absolutely fine.

…and not actually looking at the National Trust website itself.

On their official ‘Egg Hunt” page I counted 14 uses of the word ‘Easter’ plus ‘Easter’ in the very large and prominent headline you can see below. 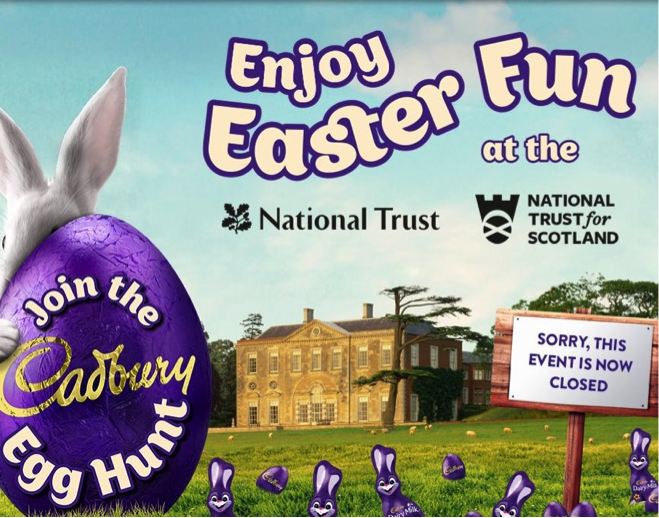 Some critics who were shown this claimed ‘Easter’ was added after – in truth, there were all kinds of theories and accusations flying around. It was crazy and very heated.

However, I actually went to one of their Egg Hunts with some friends and their kids.

The event was, quite frankly, VERY Eastery indeed, with the word emblazoned everywhere and lots of Easter eggs on sale, bunnies everywhere.

It was as Eastery as any experience I’d had since I was a kid.

But like I say, it’s not the different religious and social views that I’m interested in here…

As a writer and online marketer I am fascinated by the way stories go viral, and how a lot of these ‘news’ items are, in fact, a form of marketing,

One that ANYONE can use, no matter what your budget or skill level.

Really, it’s about seeking opportunities where you can find them. If your story has controversy, impact and outrage, then it can be powerful thing.

As long as the story chimes with the deep beliefs of your target buyer, while outraging people who would never buy your product, it can work wonders.

For instance, this Easter Egg story had one very strong beneficiary.

A company called the Meaningful Chocolate Company was selling something called The Real Easter Egg was suddenly in the mainstream papers, like this story in The Telegraph. 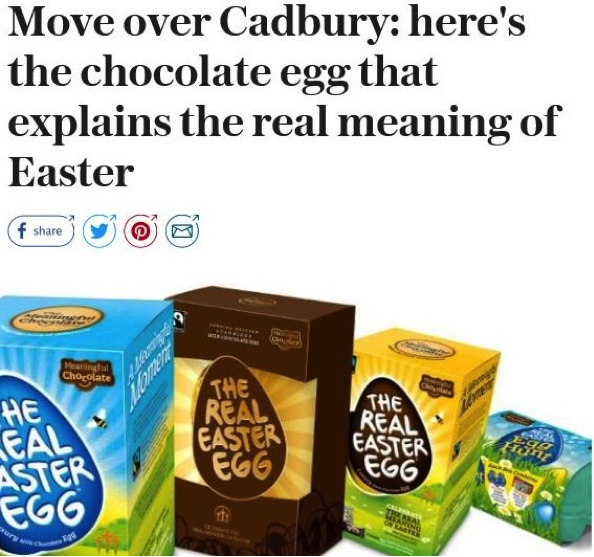 Effectively, this small Christian company was now effectively being advertised for free in the broadsheets!

People sick of the commercialisation of Easter and who feel like Christian versions of the season are being eroded.

So this would have really struck a chord.

And as for those who don’t feel like that… and think the story was blown out of proportion by a bored media hungry to exploit public outrage….

Well, they weren’t likely to buy the product anyway.

And here’s what some people think MIGHT be what happened, behind the scenes.

Could this have begun with a clever press release?

Responding to the Telegraph article, a journalist from The Mirror wrote:

“The Mirror asked co-founder David Marshall if the story had come from them.

“He said they had ‘noticed it’, but insisted they had been approached for comment on the story, not the other way around.”

This is why some people on social media speculated that press releases and communiques from the makers of The Real Easter Egg were what prompted the spread of the story. Or at least fanned the flames!

Whether true or not, the effect is the same…

This company’s seasonal product was linked into this viral seasonal story, with all the passions and politics involved, and they undoubtedly sold a lot of products off the back of it.

Which brings me to you…

What emotions and passions does your business inspire?

I recently talked about creating a compelling story for your business, based on one of 7 recommended types, and getting it into all your communications.

You can see that article here.

That’s your origin story – like superheroes, all good small businesses should have one.

But there are smaller stories you can tell, ones that connect your business’s cause and purpose to the mainstream media news.

Your customers are hearing and reading these news stories, in states of heightened emotion: joy, fear, anger, anxiety… which makes them very receptive to your message.

This is also known in marketing as ‘newsjacking’ – hitching a ride on big stories to increase the amount of attention you get for your message. It works really, really well in the modern social media age.

Can you think of any particular events, controversies, debates or passionate views that your business is linked to?

Elections, religious festivals, sporting events, TV occasions… these are all emotive, divisive and get big headlines…

What does your target customer think of them? What’s likely to be their view? What emotional state will they be in?

If you hit upon something, create blog posts, emails and social media updates that link to the story and reflect your target customers’ views and attitudes.

The post Case Study: The Great Easter Egg Fight of 2017 (And How it Made One Company a Lot of Money) appeared first on Digital Upstart.