All your tennis trading solutions for Wimbledon…

You don’t need to be a member of the A Team in order to love it when a plan comes together. I would urge those of you who are going to try and profit from Wimbledon and indeed have a go at tennis trading at www.betfair.com to have a plan for each match.

My definition of trading is unique and describes what we are seeking to do very succinctly. Trading is ‘the anticipation of a future price movement’.

So, in football, what moves the price in the betting markets? There are three main triggers to price movement as far as football is concerned. These are:

If you can anticipate there being goals (and this is entirely possible if you research your matches thoroughly, or let old muggins here do it for you via www.drt.club), then you can prepare for that future price movement.

This is trading in its most simplistic form. How then does this anticipation of a future price movement pertain to tennis?

What is going to move prices in the tennis trading market?

Let’s do some brainstorming…

There are a lot more sub-sets of this list above.

The ideal here is to first have a plan and the first step in setting up this plan is the research! It is through research that we can anticipate future price movements.

Good news for you What Really Wins Money newsletter subscribers. After my ‘pipe opener’ at the French Open, where I researched the important early matches, I will be doing the same for Wimbledon this week. So head on over to www.whatreallywinsmoney.co.uk, in particular my Bankers or Blowouts section, where I will share my research with you.

For everyone else, research in tennis is easy…

Step 1 – Go to www.betfair.com and click on your tennis match of interest. Betfair provides head-to-heads and rankings. Note them down. A tight ranking between the players, if not reflected in a tight betting market, might have a reason behind it. Click on ‘Head-to-Head’ and this will show recent form on all surfaces and today’s surface. Note the rounds in tournaments which players tended to get to, particularly on today’s surface (grass). Note any patterns (a preponderance of tie breakers, or do they tend to lose the first set then win the next two? [As Serena Williams did in the early stages of the French Open.])

Step 2 – check out head-to-heads. We put a premium on recent head-to-heads. Any patterns? Tight? Tie breakers? Go to the wire? One player utterly dominating? A recent match saw Berdych strong favourite against Karlovic, but the head-to-heads saw Ivo winning 3-4! This was a match to avoid backing the top-10 player! And so it proved. Head-to-heads can be checked out at www.atpworldtour.com and www.wtatennis.com.

Step 3 – make a note of anything you find. Follow this kind of a layout: http://blog.tradesharktennis.com/ offers a simple method of planning for a match. This is not an endorsement of this product, rather it shows you how this trader plans a match.

‘If x happens, then I will…’ He is anticipating, isn’t he?

I shared this match with you recently. ‘Twas a humdinger, as my close showbiz pal Charles Dickens said. Here’s the research… I noted in this match below that Madison Keys had beaten Lucic-Baroni 3-0 in previous meetings. Remember this statistic as the match unfolds below.

Lucic-Baroni won the first set 4-6. Therein lay the first surprise. But, as my other close show biz pal Jimmy Cricket says to me often, ‘and there’s more’…

Lucic-Baroni took a 1-5 game lead in the second set. Remember folks that this is a first to two sets match. Oh and that Keys had a 3-0 lead in head-to-heads. Cue a comeback better than Lazarus and John Travolta!

You could have layed Lucic Baroni at 1.03 in the Match Odds market, and 1.01 in the next set Winner market when she reached 1-5.

Here are the price/volume graphs…

The above graph was for the underdog, Lucic-Baroni, who was priced as an outsider here. In the middle, her odds reached a low of 1.03. Then she drifted back to where her odds were pre-match. 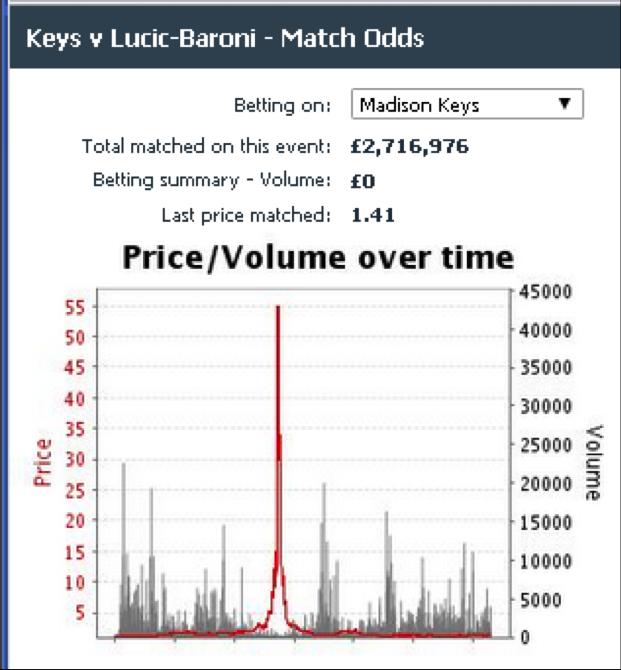 Madison Key’s odds just kept rising as she dug herself a deeper and deeper hole in this match. They started falling as she unbelievably extricated herself out of the mess!

This match above is the ideal. It is, alas, not the norm, but it is a great example of tennis trading at its most profitable.

I do hope you will give tennis trading a go. I will post my entry points at @whatreallywins (my Twitter feed) during Wimbledon. I will also be collecting any profitable trades.

Do watch out for my tennis research from 29 June at www.whatreallywinsmoney.co.uk and my tweets when there are good trades.

Have a great Wimbledon and don’t forget to cheer on Tiger Tim, sorry I mean Andy.