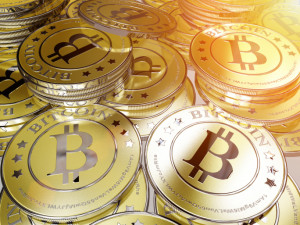 Bitcoin Mania! 10 Things You Need to Know Before Trading The ‘Crypton Currency” Rollercoaster

Last Friday the price of Bitcoin matched an ounce of gold…

Of course, it then took an immediate 13% nose drive. That thing is just so volatile. Real Wild West territory.

To be honest, I’ve tried to ignore Bitcoin ever since it came on the scene. I’m having trouble taking it seriously. A virtual currency invented by some anonymous computer programmer…

With each ‘unit’ more valuable than an ounce of gold… Really?

But I can’t deny it. This current situation has really caught my attention.

Did you hear about the man in South Wales who threw out a hard drive with over four million pounds worth of Bitcoin on it?

He ‘mined’ seven and a half thousand Bitcoins in 2009 and only stopped churning them out when his girlfriend complained. She said his laptop was being too noisy as it ran the special software.

The Bitcoins were almost worthless the day he spilt lemonade into his keyboard. He binned the hard drive and left it to fester in a landfill site near Newport. He only remembered about the Bitcoins last week (when his holdings would have been worth millions)… can you imagine the horror once he realised?

The other eye-opener has been the inevitable criminal involvement.

And that came on the heels of input.io (an Australian site) getting taken for $1.3 million. They just have a hollow apology as their homepage now. Not much comfort if it was your golden egg that disappeared into the ether.

Over in China someone’s been at it. They didn’t mess around either. Global Bond Limited – a Bitcoin exchange – began trading in June. They quickly scooped up $4.1 million in deposits and disappeared into the night, taking all the money with them!

And hot off the press as I write…

Sheep Marketplace (a kind of eBay for drug dealers) closed down at the weekend after a user high-tailed it with sixty million pounds worth of Bitcoin. The site thought it was around three million at first but the jaw-dropping truth has now been revealed…

The ‘Bitcoin Burglar’ faked the balances in people’s accounts so they didn’t even realise their Bitcoin had been lifted. Problem is, the size of his booty is making it hard to pull the covers over. Smart techies are tracking his movements around the Web as he tries to launder the stash.

And one thing’s for sure, I wouldn’t like to be in his shoes when they find him. I should think some serious baddies are busy cracking their knuckles… waiting to dish out a bit of ‘justice’!

Anyway, even before the Sheep Marketplace shenanigans, I’d been doing a bit of digging around with one eye on opportunities to short Bitcoin…

To me, it reeks of Tulip mania all over again…

Are you familiar with the story of the Dutch Tulip Bubble from the 1600’s?

Please, read this free online account from Extraordinary Popular Delusions by Charles Mackay and see if you don’t agree.

You’ll really need to make your own mind up regarding Bitcoin’s viability. But if you’d never really heard of it until it lit up the news wires recently, here are 10 things I discovered about Bitcoin you might find useful:

1) It was created by Satoshi Nakamoto – a pseudonym used by the programmer (or programmers) who authored a research paper in 2008 proposing the peer-to-peer electronic cash system. You can read that paper here

2) Unlike “real-world” currencies, there is no central bank backing Bitcoin and no tangible asset behind it. It’s simply bits of computer code with a value set by the marketplace itself. Anyone with a powerful enough computer can create a Bitcoin by running the “mining” software.

3) It lets you carry millions of pounds worth of currency across international borders (on a USB drive) and not be detected. It’s no surprise then, the online criminal fraternity was quick on the uptake. Black market site The Silk Road (selling drugs, firearms and questionable services) was powered by Bitcoin payments.

4) Only 21 million Bitcoins will ever be created. But they can be divided down to eight decimal places (0.00000001 Bitcoin), or less if ever required.

5) You can buy and sell Bitcoin on numerous online exchanges. The largest by volume is BTC China.

6) Rumour has it the China leadership is having a first crack at de-Americanising the world economy by dominating Bitcoin. The alternative view of course is that Chinese nationals are using Bitcoin as a vehicle to sneak their wealth out of China.

7) The value of Bitcoin has rocketed over recent weeks. Here’s a chart showing the parabolic spurt from $200 to $1200 in this last month alone: 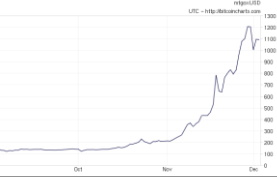 8) The growth of Bitcoin has a sinister similarity to the classic “Asset Bubble” profile. Have a look at the textbook Asset Bubble on the chart below. Are we already in ‘Bull Trap’ territory, right before the big crash, or is Bitcoin only just warming up? 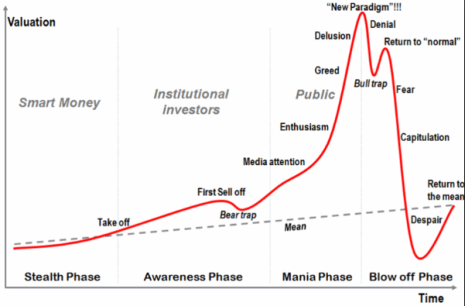 9) The price of Bitcoin hit a huge psychological resistance level last Friday (29th November) when it briefly matched the price of an ounce of Gold. Did that put a final ceiling on Bitcoin’s rally or will it take another run upwards from here? 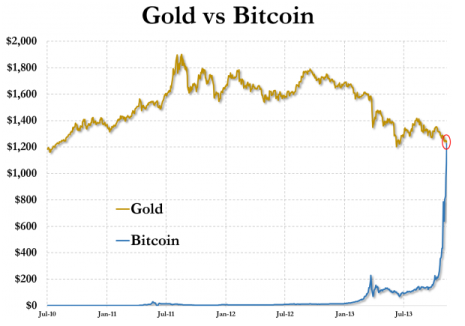 10) If you want to participate in Bitcoin’s roller-coaster ride, plus500.co.uk offer a CFD contract. Just watch the volatility doesn’t bite you!

So what do you think?

Is Bitcoin a modern day case of the Emperor’s New Clothes, or are Crypto-Currencies really the future?

It’s one of those fiercely divisive subjects…

For me, the last thing we need is another currency unsupported by anything tangible. Especially one that’s totally digital.

But then I’m more than a bit old-school. I drag myself off to the shops to buy CD’s rather than downloading music. I still can’t get my head around not having something to actually hold in my hand.

I know which I’d prefer, but if you had a choice, what would it be (and why)… a Bitcoin or an ounce of gold?

I’d love to know your thoughts.

I hope you enjoyed this week’s issue. Keep an eye out for those US jobs numbers on Friday and let me know your thoughts on Bitcoin. It’ll certainly be interesting to see where that heads over the next few days.