Today we’re continuing our series of 47 things I have learned about buying bundles at auction to resell their components separately on eBay.

Below you’ll find another ten of my secret tips and next week you can download all 47 in one report.

1. Do not promise not to bid on a lot some other person wants, in return for that person making the same promise to you. The idea is to keep bidding numbers and prices low and it’s a common occurrence that will get the perpetrators banned from a saleroom, not to mention that people promising not to bid against you will often have someone else bid for them. Either way, you lose.

2. Find the best bargains lurking deep – at the bottom of tea chests, for example, and in high cardboard boxes. That’s where earlier visitors to the saleroom sometimes hide items they don’t want other people to see. So all that later visitors see is low-value stuff at the top of the bundle and they assume the rest is also low value.

3. Look for two items fixed one on top of the other in albums containing postcards, photographs, cigarette cards and bus tickets. The trick is designed to hide high-value items and leave only low-value or worthless items on show.

But that doesn’t always mean items will be low value, mainly because some collectors may be downsizing their collections and dealers may be targeting local buyers, with no desire to reach a wider audience by travelling long distances to collectors’ fairs, or reach an international audience on eBay.

Either way, once you discover regular sellers of quality items, you can approach them and offer to buy direct, so they don’t have to pay auction selling fees and you don’t have to pay the appropriate auction buying fee.

5. Make friends with auction room staff and never criticise them for small mistakes. Ask questions about auction lots, such as whether the vendor is a collector or dealer, or if a lot has been picked over and better items sold individually and now only low-value items remain.

I have learned so much from auction room staff that isn’t revealed to awkward and ungrateful visitors.

6. Buy Victorian magazines containing advertisements drawn by popular illustrators like Cecil Aldin and John Hassall, or featuring collectable subjects. Remove artist-drawn and other collectable illustrations to sell as prints on their own or with a mount added. They’ll sell all day at £10 a throw and many magazines from the late 1800s contain ten or more individually collectable advertisements.

7. Look for historically important headline newspapers and magazines, such as revealing the Titanic tragedy, the death of Queen Victoria, the American Civil War and numerous others. Most such items can be sold intact for an easy £20–£30 pure profit per sale.

Even higher profits are possible for publications containing hundreds of individual articles, or where newspapers are too badly damaged to sell intact.

The trick to making really big profits is to cut out individual articles and call them ‘research clippings’ or ‘historical articles’. Emphasise the intrinsic value of the information to researchers, teachers, writers, and special interest collectors.

They’ll sell at £10 a time (sometimes much more) for really popular subjects like the Titanic, magician Harry Houdini, slavery, the American Civil War.

But for many people, clippings per se have very low perceived value and can generate low prices, poor feedback and high refund rates. You can increase the perceived value by cutting neatly round the edges of the clipping and placing it in a see-through bag called a ‘cello bag’ on eBay; ‘cello’ being short for cellophane.

Include a sheet of quality paper with the headline of the clipping typed proudly at the top. Now your item looks more like a research piece than a bit of old newspaper.

Here are prices fetched recently on eBay for early newspaper clippings and articles:

Vintage Hebrew Israeli Magazine 1958 with Article by Rika Zarai fetched £234.36. (Notice how the complete magazine is on sale with one specific article featured in the listing title?)

A few years back I bought an old sporting newspaper featuring famous boxers, in particular Tom Sayers, mentioned in that earlier listing. I listed articles and illustrations separately on eBay and made between £20 and £100 per item.

Tip: Especially look out for big bundles of very early newspapers and magazines; either separate publications or bound as six-month or twelve-month issues. Focus on subjects collectable in their own right, such as sports, topographical areas, movie legends, and articles by famous writers.

The same person sold numerous topographical articles with photographs the same day for £30 each, all looking to come from the same magazine and possibly the same issue.

8. Buy big bundles of military badges, especially from the First World War. They are usually made from metal and were worn on soldier’s caps and lapels. The more badges that were issued for a specific regiment, the lower their resale prices are likely to be, compared to those issued for smaller regiments existing for just a short time.

Choose lots with regiments named on the badges so you can list items faster than for regiments with just symbols and requiring extensive research to identify the military unit.

9. Buy albums of Victorian greetings cards, contained loose or fixed fast to album pages. Loose items can be sold separately and sometimes attract really high prices for images that are collectable per se, such as cats and dogs, soldiers from named regiments, and ‘greetings from [named location]’ cards.

Items fixed to album paper can be removed and sold with their backing intact – but expect lower prices than for cards contained loose in albums.

But by far the biggest benefit of 19th century and earlier greetings cards is that they are in the public domain – their images, verses and captions can be used to create your own line of prints and greetings cards.

10. Funeralia accounts for some of the largest collections of small items you will ever find at auction: you will often find thousands of small in memoriam cards in one auction lot.

They come in lots of different styles, such as: 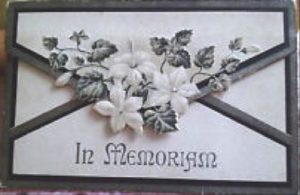 And these are the sort of prices they fetch on eBay:

Because they’re usually packed close together in boxes, you’ll often find them overlooked at auction – sometimes because they’re camouflaged by larger lots or because people can’t be bothered to extricate cards for inspection.

This is usually because funeral cards can be difficult to remove from boxes without causing damage. The worst damage comes from trying to remove just one item from the box and finding it tears or creases from the weight of other items surrounding it. It’s much easier and less damaging to remove a bundle of cards about two inches thick, which will stand the pressure of nearby cards.

Look for cards relating to accidents and disasters, or for celebrity and well-known individuals like royals and aristocrats, writers and scientists, and so on. Such items are likely to fetch three to four times more than funeral cards for little-known individuals.

But even anonymous individuals can fetch high prices if they died in unusual circumstances, such as a colliery accident or tram crash; or if they lived or were buried in collectable topographical areas, notably small towns and villages where fewer funerals would take place than in large towns and cities.

And, of course, the fewer the number of funerals, the more collectable and pricier the ‘in memoriam’ cards are likely to be.

And there you have it: another ten things I have learned over more than 40 years of buying bundles at auction to resell their individual components separately elsewhere.

Now go and try out those ten tips while I compile the full report for you to download free of charge next week.